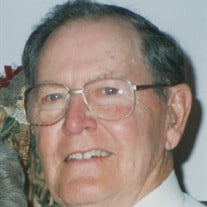 William "Bill" Difani Phillips, Sr., 95, of Perryville, passed away peacefully on Sunday, November 29, 2020 at Independence Care Center of Perry County in Perryville, MO. Bill was born April 13, 1925 in Fort Worth, Texas, son of Leo Entler Phillips, Sr. and Ulva Clara (Difani) Phillips. He and Anne Cecilia Newnam were married on June 4, 1948. She preceded him in death on April 16, 2016. Bill was a graduate of Arlington Heights High School in Fort Worth, Texas, and earned a degree in Chemistry at Texas Tech University in Lubbock, Texas. He was a member of the 91st Gun Battery of the 3rd Defense Battalion of the US Marine Corps during World War II, serving in the Pacific Theater. After his uncle Harry Phillips' death the preceding year, he moved his family to Perryville in 1952 to take Harry's place at the Bank of Perryville (now The Bank of Missouri). He retired from the bank after 46 years, serving as a teller, loan officer, vice-president, and member of the bank's board of directors. An active businessman in Perryville, Bill served as treasurer of the first board of directors of Perryville Country Club, secretary and president of the local Lions club, president of the Mount Hope Cemetery Association, president of the Chamber of Commerce, treasurer of Perryco Estates, and also was a member of the Perryville Planning and Zoning Board. He was a Cursillo member and also a member of the Perryville Development Corporation. Bill served as Finance Chairman of the Seminary Picnic Committee for over 50 years. He was a member of American Legion Post 133, AmVets Post 94, and Veterans of Foreign Wars Post 4282. He was also a 3rd Degree member of the Knights of Columbus Council 1263, and a 4th Degree member of Knights Assembly 581. The State of Missouri recognized him as a Master Angler. Bill's hobbies included golfing, hunting dove and quail, raising Brittney Spaniels, and playing cards. He was often cited by his pitch playing friends as being the best partner in Perry County, always having the cards his partners needed to make their wild bids. Survivors include his two children, William D. (Susan Rice) Phillips Jr., and Therese' Anne Gremaud of Perryville, MO. Other survivors include his grandchildren, Laura (Jeffrey) Moll, Michelle (John) Guerra, Melissa Hayden, Meghan (Ronald) Mattingly, and Michael (Cora) Gremaud. He also leaves behind his great-grandchildren, Anthony Moll, Tyler Moll, Nathaniel Moll, Madeline Guerra, William Guerra, Katherine Guerra, Evan Hayden, Colby Hayden, Logan Hayden, Hunter Mattingly, Aubrey Mattingly, Preston Gremaud, Harrison Gremaud, and Ellianna Gremaud. He is also survived by a brother, Dr. Robert Eugene Phillips of Weatherford, Texas, a sister-in-law, Patricia Moyer of Denver, Colorado, and many cousins, nieces, and nephews. He was preceded in death by his parents, wife, brothers Leo Entler Phillips, Jr., Dr. Thomas Logan Phillips, two sisters-in-law, Betty Ann Phillips, and Marjorie Ann Phillips. Visitation will be at Ford and Young Funeral Home on Sunday, December 6, from 4 to 6 p.m. and from 6:30 a.m. to 9:30 a.m. He will then be taken to St. Vincent de Paul Catholic Church for Mass at 10:00 a.m. with the Rev. Joe Geders C.M. officiating. Burial will be at Mount Hope Cemetery with military graveside services provided by VFW Post 4282 Honor Guard. The family requests that masks be worn for visitation and the Mass. In lieu of flowers, the family request that donations be given to St. Vincent de Paul Education Foundation or St. Vincent de Paul Centennial Endowment Fund. Online condolences may be made at www.fordandyoungfuneralhome.com. Ford and Young Funeral Home is in charge of arrangements.

The family of William D. Phillips Sr. created this Life Tributes page to make it easy to share your memories.

Send flowers to the Phillips family.