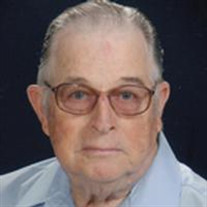 Sylvester L. Geringer, 86, of Perryville died December 24, 2016 at his residence near Biehle, MO. He was born July 6, 1930 in Biehle, MO, son of Louis A. and Christine (Schwein) Geringer. He married Lunette Marie Bohnert on June 26, 1954. She preceded him in death on October 3, 2007. Sylvester had a passion for farming (livestock and grain.) Prior to farming he was employed by the International Shoe Company in packaging until it closed in 1964. He was a US Marine veteran of the Korean conflict. Sylvester was a member of St. Maurus Catholic Church, American Legion and the V.F.W. Survivors include two sons and three daughters, Larry (Teresa) Geringer, Sharon (Paul) Lintner, Carolann (Danny) Wahl and Diane (Joseph) Geile all of Perryville and Gerald (Greta) Geringer of Dardenne Prairie, MO, eleven grandchildren, Nathan Geringer, Jeremiah, Krystal, Angela and Renee Lintner, Brittany Pulley, Colt and Chanel Wahl,Tristan Geile, Alex and Evan Geringer. He was preceded in death by his parents, wife, one brother, Joseph and one step brother, Flavian Schwein and one sister, Wilma Wills. Visitation will be held at Young & Sons Funeral Home on Tuesday, December 27 from 4:00 to 8:00 pm and on Wednesday from 6:30 am – 9:15 am with rosary at 8:30 am. Funeral Mass will be held at St. Maurus Catholic Church in Biehle on Wednesday at 10:00 am with Rev. Jim French officiating. Burial in Church Cemetery with military graveside provided by the Marine Corp. Memorials are preferred to St. Maurus Catholic Church, Tri County Hospice or any Veterans organization. Young & Sons Funeral Home, Inc. in Perryville, MO provided the arrangements.

The family of Sylvester L. Geringer created this Life Tributes page to make it easy to share your memories.

Send flowers to the Geringer family.