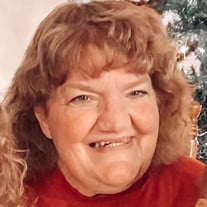 susan yamnitz, 62, of Perryville, Missouri passed away Sunday, May 2, 2021 at her home in Perryville. She was born February 7, 1959 in Perryville, Missouri to Dalvin Otto and Viola Elizabeth (Clements) Yamnitz. susan was the first female gas station attendant in Perryville. She started her career in 1978 where she worked eight years at the Clark Station. She continued her career in the gas business by managing Express Lane for 15 years and then as manager of MotoMart for 20 years. susan was a member of St. Vincent de Paul Catholic Church in Perryville. She was a past member of the Perryville Chamber of Commerce where she served on the Board of Directors for two years. She was also a former member of Perryville Community Betterment. Additionally she served on the Perryville Optimist Soccer Board and was a former Girl Scout Leader. susan was an avid collector of snowmen and frogs. She was well known for her love of her family, loud voice, line of b.s. and for not using capital letters. Survivors include one son, Gabe (Paige) Layton of Perryville, MO; one daughter, Tessa Yamnitz and her significant other Jamie Meyer of Perryville, MO; Eight sisters and four brothers, Lisa Shedd of Perryville, MO, Kim (Neal) Kaempfe of Perryville, MO, Donna (Alan) Ford of Jackson, MO, Ed (Jennifer) Yamnitz of Stockton, CA, Carolyn (Leon) Spencer of Guthrie, OK, Jim (Cindy) Yamnitz of St. Louis, MO, Elizabeth (Rick) Taylor of Perryville, MO, Linda (Brad) Riney of Perryville, MO, Bill (Lynn) Yamnitz of Fieldon, IL, Bob (Marilyn) Yamnitz of Perryville, MO, June (Dave) Ernst of Perryville, MO, Melba Wilmarth of Cape Girardeau, MO; two grandchildren, Cisely and Atlas Layton; 31 nieces and nephews; 43 great-nieces and great-nephews and her Florida family Chris, Lois, Dave, Chase and Drew. She was preceded in death by her parents, one sister, Marilyn Yamnitz; one niece, Kristen Yamnitz; one great-nephew Xavier Basler and one brother-in-Law, George Wilmarth. Visitation will be Thursday, May 6, 2021 from 4:00 pm to 8:00 pm and Friday, May 7, 2021 from 6:30 am to 10:00 am at Ford and Young Funeral Home in Perryville. Funeral Service will be Friday, May 7, 2021 at 10:00 am at Ford and Young Funeral Home in Perryville. Burial will be at Mount Hope Cemetery in Perryville. Memorial contributions may be given to family use. Checks can be made out to Susan L. Yamnitz Living Trust. Online condolences may be made at www.fordandyoungfuneralhome.com. Ford and Young Funeral Home is in charge of arrangements.

The family of Susan Yamnitz created this Life Tributes page to make it easy to share your memories.

Send flowers to the Yamnitz family.