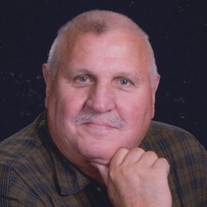 Steven Louis Boxdorfer, 68, of Perryville, died Friday, July 3, 2020 at St. Francis Medical Center in Cape Girardeau, MO. He was born May 19, 1952 in St. Louis, MO to George and Marie (Hoffman) Boxdorfer. He and Catherine S. Hanquist were married March 29, 1974. She survives in Perryville. Steven was an assistant manager at Orscheln's in Perryville. He was a member of New McKendree United Methodist Church in Jackson. He was a US Marine Corp Veteran of the Vietnam War. He worked for Hanquist Oil, Buchheit Building and the Perry County Sheltered Workshop. Steven was an avid hunter and fisherman. He loved his family especially his grandchildren and spent his time spoiling them. Survivors include his son, Gregory (Kimberly) Boxdorfer of Altenburg, three sisters, Goldie (Frank) Panhorst of St. Louis, Juanita (Bob) Gore of Wright City, MO and Sandra (Bob) Glaub of Malden, MO, sister-in-law, Tina Boxdorfer of Perryville, brother-in-law, Art Tayon of Perryville, and three grandchildren, Katie, Brody and Jack. He was preceded in death by his parents, three sisters: Euline Tayon, Betty (Bill) Brannon, Marcella Boxdorfer, two brothers, Marvin and Keith Boxdorfer, sister-in-law, Wanda Boxdorfer. Visitation will be from 10:00 am to 4:00 pm on Tuesday, July 7, 2020 at Ford & Young Chapel in Perryville. Service will be at 4:00 pm Tuesday, July 7, 2020 at Ford & Young Chapel in Perryville with Rev. Bryan Wendling officiating. Military Honors will be provided by the Marine Corp and the American Legion at the funeral home following the service. Burial will be at a later date in Home Cemetery. Memorial contributions may be given to Parkinson's Foundation or the New McKendree United Methodist Church in Jackson. Online condolences may be made at www.fordandyoungfuneralhome.com. Ford & Young Funeral Home is in charge of arrangements.

The family of Steven Louis Boxdorfer created this Life Tributes page to make it easy to share your memories.

Send flowers to the Boxdorfer family.