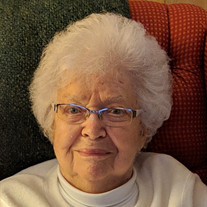 Shirley "Shea" Catherine Bey, 98, of Perryville, MO, died Tuesday, December 10, 2019 at Independence Care Center. She was born February 2, 1921 in St. Louis, MO to Eugene Arthur and Stella (Shirley) Kupferer. She and Paul Bey were married on February 3, 1951. He preceded her in death on December 15, 2001. Shea was a member of St. Vincent de Paul Catholic Church and was a home maker. She was a Veteran of the US Navy and member of the American Legion, Girl and Boys Scouts, Cancer Survivor Team, and Shea volunteered with the Alzheimer's Association. She was a Red Hat Lady and very active in the Community Concert Series. She was a avid bridge player, bird watcher, art enthusiast, and world traveler. Shea enjoyed sharing her love for the arts and photography with family and friends. Survivors include her daughter, Carolyn (Donald) Hardaway of Perryville, MO and one son, John (Karen) Bey of Cape Girardeau, MO, four grandchildren, Sarah Bey, Katie Bey, Maria Pontillas-Shackles and Ryan Pontillas. She was preceded in death by her parents, two brothers: Eugene Kupferer Jr. and Richard Kupferer and one grandchild, Laurie Pontillas. Friends may call 4:00 PM to 8:00 PM on Sunday, December 15, 2019 and from 6:30 AM - 9:30 AM on Monday at Ford & Young Chapel in Perryville. Funeral Mass will be at 10:00 AM Monday, December 16, 2019 at St. Vincent de Paul Catholic Church in Perryville with Rev. Joe Geders officiating. Burial will be at Mount Hope Cemetery with military honors provided by American Legion and US Navy. In lieu of flowers memorial contributions may be given to American Cancer Society or Alzheimer's Association. Online condolences may be made at www.fordandyoungfuneralhome.com. Ford & Young Funeral Home is in charge of arrangements.

The family of Shirley "Shea" Catherine Bey created this Life Tributes page to make it easy to share your memories.

Send flowers to the Bey family.