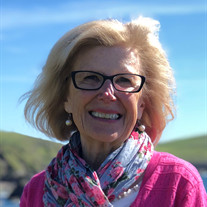 Sandra S. Bratcher (Zahner), 69, peacefully passed away surrounded by her family Friday, September 11, 2020 at home in Chesterfield, MO. She was born January 28, 1951 in Chester, IL to Clarence and Beatrice (Hudson) Zahner. She was raised in Silver Lake, MO along with her eight siblings. She attended St. Vincent High School in Perryville, MO where she was crowned Homecoming Queen and graduated in 1969. After earning her Cosmetology degree, Sandy traveled the world, and landed in Jackson Hole, WY where she spent her most treasured years. While there, she was blessed with her greatest joys, her two children, Jessica and Zack. She had a special gift of making friends everywhere she journeyed and created so many beloved memories. No matter where life took her, she remained close and devoted to her family, and eventually returned to St. Louis to raise her children. While she made her living as a hairstylist, she was so much more. She was amazingly creative, a lover of the arts, an accomplished seamstress and a superb cook. Above all, she adored spending time with her grandchildren, who were the sunshine of her life. Sandy had a way of making those around her feel cherished and loved. She always managed to transform the mundane into something spectacular. No matter what challenges life handed her, she found a way to turn everything into beauty. She had an unshakeable inner strength, and was a perfect mix of grit and grace topped off by a gorgeous smile. Sandy's relationship with Jesus Christ was paramount in her life, and she aspired to live in a way that honored God. Her heart was as an encourager, and she spread the love of Christ to everyone that knew her. She was a dedicated member of Life Church in St. Louis. She leaves behind her Daughter, Jessica (Brent) Barks; Son, Zachariah (Megan) Koehler; Siblings, Cassie (Charlie) Courtois, Joe (Joyce) Zahner, Wayne (Dennis) Zahner, Bob (Grace) Zahner, Mike (Brenda) Zahner; Patty (Joe) Anderson and Diane (Keith) Geile; Grandchildren, Nolan and Adeline Barks; Step-daughters, Lauren (Steve) Sizemore and Esther (Chris) Rosso; Step-grandchildren, Isabella, Isaac and Ian Sizemore, Adam, Bradly and Hunter Rosso. She was preceded in death by her parents, Speedy and Bea Zahner and Brother, Kenny Zahner. On Thursday September 17th, the Visitation will be held at 9:30am, followed by a Funeral Mass at 1:00pm at St. Rose of Lima Catholic Church in Silver Lake; officiated by Rev. Joe Geders. Burial will be directly following the Mass at St. Rose of Lima Catholic Cemetery in Silver Lake. Contributions may be given in Memory of Sandra Bratcher to the American Cancer Society or to Annie's Hope (for grieving children). Ford and Young Funeral Home is in charge of arrangements. Online condolences may be made at www.fordandyoungfuneralhome.com

Sandra S. Bratcher (Zahner), 69, peacefully passed away surrounded by her family Friday, September 11, 2020 at home in Chesterfield, MO. She was born January 28, 1951 in Chester, IL to Clarence and Beatrice (Hudson) Zahner. She was raised in... View Obituary & Service Information

The family of Sandy S. Bratcher created this Life Tributes page to make it easy to share your memories.

Send flowers to the Bratcher family.