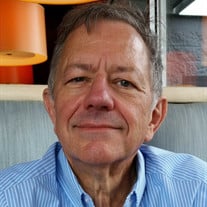 Roger Dale Balsman, 74, of Perryville, Missouri died unexpectedly Tuesday, December 14, 2021 at Southeast Hospital in Cape Girardeau. He was born November 5, 1947 in Perryville, MO to Earl Balsman and Anna (Lukefahr) Balsman. He served in the Vietnam War in the Air Force. He received a degree from Northrup Institute of Technology in California and became a Aeronautical Engineer at Boeing. He was a lifelong member of St. Vincent de Paul Catholic Church. Roger served as a caregiver of his father. In addition, he loved reading, gardening flowers, walking, and the discussion of airplanes and World War II. He played trumpet in the high school band. Survivors include sister, Madonna (Richard) Snelson of Broken Arrow, OK; niece, Melinda Ann Snelson of Broken Arrow, OK; cousins, David Balsman, Terry Balsman, Kay (Jim) Naeger, Ann (Raymond) Davis; aunt, Erma Brown of Perryville, and many cousins and friends. He was preceded in death by his parents. Visitation will be 9:00 am to 10:00 am on Monday, December 20, 2021 at St. Vincent de Paul Catholic Church in Perryville. Mass will be at 10:00 am Monday, December 20, 2021 at St. Vincent de Paul Catholic Church in Perryville with Father Ben Melaku officiating. Burial will be at Mount Hope Cemetery in Perryville. Memorial contributions may be given to St. Vincent de Paul Catholic Church. Online condolences may be made at www.fordandyoungfuneralhome.com. Ford and Young Funeral Home is in charge of arrangements.

The family of Roger Balsman created this Life Tributes page to make it easy to share your memories.

Send flowers to the Balsman family.