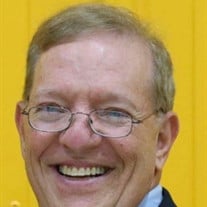 Robert Otto "Bob" Yamnitz, 69, of Perryville, Missouri passed away on Thursday, December 2, 2021 on a beautiful beach while on vacation in St. John, the US Virgin Islands. He was born on August 5, 1952 in Perryville, Missouri to Dalvin Otto and Viola Elizabeth (Clements) Yamnitz. Bob was raised in Perryville, MO and became an Eagle Scout before graduating from Perryville High School in 1970. He attended the University of Missouri - Rolla before enlisting in the US Navy in 1973. In 1974 he was introduced by his then 5-year-old niece Laura to a friend in the Philippines named Marilyn, with whom he would correspond by mail. In 1976 he would fly to the Philippines while on leave to marry Marilyn within just a week of meeting her in person, starting a marriage that would last 45 years. He was honorably discharged from service in 1977 while stationed at NAS Oceana in Virginia Beach, VA, having earned the rank of Petty Officer 3rd Class, working as a weapons systems technician for the A6 Intruder attack aircraft. He had earned the National Defense Service Medal and a Good Conduct Award. Afterwards, he returned to college, graduating from Southeast Missouri State University in 1979 with a degree in computer science. He immediately started his career with Southeastern Bell Telephone/ATandT as a computer programmer in St. Louis, MO, moving for a promotion in 1982 to Orlando, FL, where he ultimately raised his family. After retiring from ATandT as a System Analyst Manager in 2009, he returned to Perryville, and worked to restore the Shelby-Nicholson-Schindler historical house into a home while working a "retirement job" as technical support for research and development at Gilster Mary-Lee. He loved reading, coin collecting, playing cards, THE Cards, traveling, swimming and the beach, but above all, God, family, and country. He is survived by his loving wife, Marilyn Beltran Yamnitz of Perryville, MO; two sons, Carl Robert (Jennifer) Yamnitz of Huntsville, AL, and Dustin Ray (Allyson) Yamnitz of St. Louis, MO; four grandchildren, Nolan Robert, Beckett Ray, Aras Samuel, and Carlo Shay Yamnitz; eight sisters and three brothers, Melba Wilmarth of Cape Girardeau, MO, June (Dave) Ernst of Perryville, MO, Bill (Lynn) Yamnitz of Fieldon, IL, Linda (Brad) Riney of Perryville, MO, Elizabeth (Rick) Taylor of Perryville, MO, Jim (Cindy) Yamnitz of St. Louis, MO, Carolyn (Leon) Spencer of Guthrie, OK, Ed (Jennifer) Yamnitz of Stockton, CA, Donna (Alan) Ford of Jackson, MO, Kim (Neal) Kaempfe of Perryville, MO, and Lisa Shedd of Perryville, MO; two Beltran family sisters-in-law and four brothers-in-law; 51 nieces and nephews; 61 great-nieces and great-nephews; and long time friends including the "Orlando Gang," Prima and Alvin Hower, Marlene and Bill Kostik, and Guada and Steve Shafer. Those that proceed him in death include his parents, his father- and mother-in-law, Juan and Genoveva Beltran; two sisters, susan yamnitz and Marilyn Yamnitz; one niece, Kristen Yamnitz; one great-nephew Xavier Basler, and one brother-in-law George Wilmarth. A celebration of life will be held on Saturday, December 11, 2021 from 9:30 AM to 11:00 AM at Ford and Young Funeral Home in Perryville. Burial will be on a future date at Jefferson Barracks National Cemetery in St. Louis, MO. In lieu of flowers, the family asks that donations be made to the Missouri National Veterans Memorial.

Robert Otto "Bob" Yamnitz, 69, of Perryville, Missouri passed away on Thursday, December 2, 2021 on a beautiful beach while on vacation in St. John, the US Virgin Islands. He was born on August 5, 1952 in Perryville, Missouri to Dalvin Otto... View Obituary & Service Information

The family of Robert O. Yamnitz created this Life Tributes page to make it easy to share your memories.

Send flowers to the Yamnitz family.