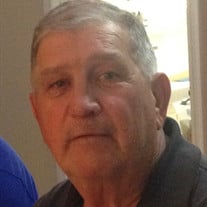 A wonderful husband, father, grandfather, brother and friend, Robert Wayne Hacker of Brewer, Missouri died peacefully on Thursday, July 22, 2021, at his home surrounded by those who loved him. He was 78. Bob was born July 17, 1943, in Cape Girardeau, Missouri to Robert A. Hacker and Irma O. Kaempfe Hacker. He is survived by his loving wife of 53 years, Margaret (Pouyer) Hacker; three sons: Shawn Hacker of Cape Girardeau, Phillip Hacker (Tammy) of Perryville, and Ryan Hacker (Tabetha Rhinehart) of St. Mary's; granddaughter, Maggie Hacker; and grandsons, Derek Hacker, Clinton Beasley and Jonathan Hacker. He is also survived by his sister, Anna Lexow. Bob was preceded in death by his parents Robert A. and Irma O. Hacker; brother, John Hacker and brothers-in-law, Larry Lexow and Joe Pouyer. Bob worked for Graybar Electric in St. Louis for 36 years as a warehouseman and deliveryman. He was passionate about his job and always represented his company to the highest degree. Bob frequently brought donuts to the workers on the construction sites where he made deliveries, and often had Graybar-branded rulers made as gifts for construction workers. Bob absolutely loved his job and looked forward to going to work every day. Even after retirement, while traveling, Bob loved to visit Graybar's wherever he was in the United States. Many people experienced Bob's kindness and warmth. Bob loved people and made it his personal mission to give help to anyone who needed it. For 28 years, Bob drove back and forth from Brewer to St. Louis and would often stop at Brewer exit at 5:00 AM to give a ride to anyone in need of one. Bob was a lifelong member of the Immanuel Lutheran Church in Perryville, Missouri. He enjoyed working the family farms, photography, and looking for treasures at antique stores wherever he traveled. Bob was quite the negotiator, always seeking a bargain. He was an avid collector of John Deere memorabilia, train sets, beer clocks, mugs and glasses. He had a personal passion for family, the St. Louis Cardinals, anything Graybar, old tractors and conversation. Bob will be dearly missed. A memorial service will be held at Hill of Peace Lutheran Church in Friedenberg on Saturday, July 31, 2021 from 10:00 AM until time of service at 11:00 AM with Rev. Matthew Marks officiating. In Lieu of flowers memorials can be made to Immanuel Lutheran Church, Immanuel Radio Broadcast or Friedenberg Historical Society. Online condolences may be made at www.fordandyoungfuneralhome.com. Ford and Young Funeral Home is in charge of arrangements.

A wonderful husband, father, grandfather, brother and friend, Robert Wayne Hacker of Brewer, Missouri died peacefully on Thursday, July 22, 2021, at his home surrounded by those who loved him. He was 78. Bob was born July 17, 1943, in Cape... View Obituary & Service Information

The family of Robert Wayne Hacker created this Life Tributes page to make it easy to share your memories.

Send flowers to the Hacker family.