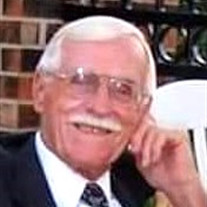 Obituary for Robert Theodore Bachmann 88, of Richmond, Kentucky. Bob was born in Perryville, Missouri to Theodor and Margaret (Valleroy) Bachmann on October 9, 1931 and passed away on December 23, 2019 in Milwaukee, Wisconsin at the age of 88. He was preceded in death by his beloved wife Peggy. He is survived by his brothers Melvin Bachmann of St. Louis, Calvin Bachmann (Lorna) of Perryville, and his sister Janet Feltz of Perryville. He was the loving father of Cindy Brigham (Steve) of Kingwood, TX; Kirk Bachmann (Sue) of Milwaukee, WI; Lori Heidenreich (John) of Sparks, NV; and Katey Mitchell (Randy) of South Milwaukee, WI. He was step father to Rev. John (Janine) Britt of MI and Rev. Jim Britt (Denise) of MI. Bob and Peggy were grandparents of Amy, Kristen, Michael, Kirk Jr, Jenny, Lauren, Chase, Emilie, Johanna, Bethany, Amy, Emily, John, Liz, Missa, and Naomi. He is further survived by 17 great-grandchildren and counting. He will also be missed by several nieces, nephews, cousins, and many beloved friends. Bob graduated from Perryville High School with the class of 1949 and was able to participate in the 70th reunion of his class this past October. He started his working career at the Frohna Machine Shop, then worked for Firestone Tire and Rubber Company. In his 35 years with Firestone he lived and worked in Cape Girardeau, Poplar Bluff, St. Louis, Milwaukee WI, Fargo ND, (then back to Milwaukee), and finally Honolulu HI. After attending Officers Training School at Fort Benning, Georgia he served with the Army National Guard and Army Reserves in Missouri, Wisconsin, North Dakota, and Hawaii. He retired after 35 years of service at the rank of Lt. Colonel. Bob enjoyed playing basketball in his younger years and was a long distance runner. He completed several marathons while living in Hawaii. After retirement, Bob and Peggy moved to Richmond, Kentucky. Together, they were very active members of the First United Methodist Church, they helped organize Crop Walk and enjoyed many activities with their friends. In addition, Bob worked with Habitat for Humanity of Madison and Clark Counties in Kentucky and worked on numerous projects in several areas of the country. Bob was an avid golfer from an early age. He loved playing with his Uncle Clarence and brother Mel, as well as buddies from all over the country. When visiting Wisconsin he was able to enjoy a few rounds with his son Kirk and grandsons Michael and Kirk Jr. He was looking forward to seeing his great grandchildren also take up the game. He was proud to finally achieve a hole in one about 2 years ago and proudly displayed the ball for all to see. Wintering in Ruskin, Florida at his beloved Manatee RV Park allowed him to enjoy his golf and other favorite outdoor activities all year round. In quieter moments, he loved reading, solving crossword puzzles, and Sudoku puzzles. The Green Bay Packers as well as The Kentucky Wildcats- both football and basketball were his favorite teams. He was a loyal fan; making sure that wherever he lived, his cable or satellite providers included a sports package so he wouldn’t miss any games. His love of traveling took him far and wide. He was able to travel all across the US, and took trips to Australia, New Zealand, Canada, much of Europe, and several countries in Africa. As a family we had many adventures camping, and in recent years traveled to Yellowstone National Park, Lake Cumberland KY, and took an Alaskan Cruise. He was greatly loved and will be missed by many. Visitation will be held at Ford & Young Funeral Home on Thursday, January 2 from 4:00 to 8:00 pm and on Friday, January 3 from 6:30 am until time of funeral service 10:00 am with Rev. Kevin Barron officiating. Burial in Immanuel Lutheran Cemetery with Military funeral honors provided by American Legion Post 133 and Delta Team. In lieu of flowers, consider donations to Habitat for Humanity or the Wounded Warrior Program. Online condolences may be made at www.fordandyoungfuneralhome.com. Ford & Young Funeral Home is in charge of arrangements.

Obituary for Robert Theodore Bachmann 88, of Richmond, Kentucky. Bob was born in Perryville, Missouri to Theodor and Margaret (Valleroy) Bachmann on October 9, 1931 and passed away on December 23, 2019 in Milwaukee, Wisconsin at the age of... View Obituary & Service Information

The family of Robert Theodore Bachmann created this Life Tributes page to make it easy to share your memories.

Send flowers to the Bachmann family.