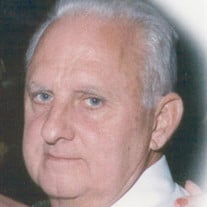 Richard Theodore Weber, 78, of Frohna, Missouri passed away Saturday, December 19, 2020 at Southeast Hospital with his family by his side. He was born at home on the "Ridge" in Altenburg, Missouri on August 7, 1942 to Edmund and Verna Mangels Weber. Richard and Kathryn (Steffens) Weber were married for 53 years and had 4 children: Kimberly (Les) Fritsche, Shelly (Rodney) Steffens, Matthew (Christa) Weber, and Rachel (Bleau) Deckerd. They enjoyed eleven grandchildren: Garrett (Katie) Fritsche, Brandon (Megan) Steffens, Evan Steffens, Clayton (Taylor) Fritsche, Lydia Steffens, Isabella Deckerd, Adalina Deckerd, Ava Weber, Emma Weber, Eli Deckerd, and Madelyn Weber. They also enjoyed seven great grandchildren: Mason, Cole, Lynnex, Phynix, Noah, Lucas, and Drew. Richard had 4 sisters: Arlene (Lynn) Fluegge, Ruby (Jon) Majors, Mary (Tom) Kiehne, and an infant sister, Betty Jean who passed away shortly after birth. Richard was also preceded in death by his parents Edmund and Verna, his infant sister, and his brother in law Tom Kiehne. Richard graduated from Perryville High School in May 1960 and went on to serve as a Corporal in the United States Marine Corp from July of 1960 to May of 1964. After completion of his military service. He attended Parks College of Engineering, Aviation and Technology. Richard went on to become a licensed aircraft mechanic and worked for American Airlines, and eventually went to work for NCR Corp and XEROX, where he retired from in 2005 The two most important things to Richard were his faith in Christ and his family. His legacy in life will be his selfless service to others. He was a member of Immanuel Lutheran Church in Altenburg, Missouri and he loved serving on the church council and volunteering for many of the church activities. He was a proud member of the American Legion, East Perry County Jaycees, East Perry County Lions Club, and the East Perry County Community Fair Board. Richard frequented area nursing homes, where he often visited relatives and friends, bringing a welcome smile to those in need. Richard loved spending time with family and friends and being out in nature. He was an avid fisherman and hunter and he cherished his time with his Deer Cabin Friends every November. He also enjoyed riding his four wheeler, and working with scrap metal. Richard was a sports fan and always enjoyed watching St. Louis Cardinal Baseball and Nebraska Cornhusker Football, but his favorite sport of all was his beloved Immanuel Lutheran Softball Team, which he watched every summer. Richard was a stranger to no one and a friend to many. Visitation will be from 8:30 am to 10:30 am on Wednesday, December 23, 2020 at Immanuel Lutheran Church in Altenburg. Funeral Service will be at 10:30 am Wednesday, December 23, 2020 at Immanuel Lutheran Church in Altenburg with Rev. Frank Lucas officiating. Burial will be in the Church Cemetery with Military Graveside provided American Legion and US Marines Honor Team.. Memorial contributions may be given to Immanuel Lutheran Church, Saxony High School or Family Use. Online condolences may be made at www.fordandyoungfuneralhome.com. Ford and Young Funeral Home is in charge of arrangements.

Richard Theodore Weber, 78, of Frohna, Missouri passed away Saturday, December 19, 2020 at Southeast Hospital with his family by his side. He was born at home on the "Ridge" in Altenburg, Missouri on August 7, 1942 to Edmund and Verna Mangels... View Obituary & Service Information

The family of Richard Theodore Weber created this Life Tributes page to make it easy to share your memories.

Send flowers to the Weber family.