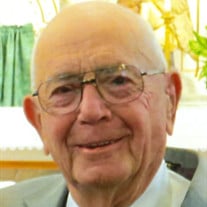 Paul A. Unterreiner, 94, of Perryville, Missouri passed away Monday, August 2, 2021 at his home. He was born January 7, 1927 in Apple Creek, Missouri to Anton M. and Barb E. (Bohnert) Unterreiner. He was married April 27, 1946 to the late Rosalie (Moore) Unterreiner. He later married Mary Shrum who preceded him in death. He is married to Ethel Winschel who survives in Perryville. Other survivors include four daughters and two son-in-laws, two sons and two daughter-in-laws; Joan Behrle of Perryville, Jean Unterreiner of Atlanta, GA, Gerald "Buck" (Diane) Unterreiner of Perryville, Donna (Doug) Ludwig of Kansas City, MO, Roger (Maria) Unterreiner of St. Louis, Rose (Mike) Ochs of Jackson, MO; one sister-in-law Sylvia Moore of St. Louis, MO; 24 grandchildren, 26 great-grandchildren, two great-great-grandchildren, eight step-children and many step-grandchildren. He was preceded in death by his parents, two sons Paul D. Unterreiner and Stephen Unterreiner; one daughter, Catherine Unterreiner; two grandsons, Lucas Unterreiner and Joseph Ludwig; one great grandson, Ryan Behrle; two brothers, Walter (Lenita) Unterreiner and Lonnie Unterreiner; three sisters, Barbara (Edwin) Buchheit, Wilma (Anton) Buchheit, and Theresa (Eldon) Moore; sister-in-law, Ruth (Raymond) Balsman and Rosati Moore, Jr.; nephews, Fr. Richard Buchheit, Ronald Moore and Robert Cissell. Mr. Unterreiner worked many years at the International Shoe Company as Superintendent until it closed. He also worked as the Foreman at the Perry Park Center until he retired at the age of 80. He was a member of St. Vincent de Paul Catholic Church and the Knights of Columbus. He was a loving father and husband. He enjoyed a day of hard work, farming cattle, dancing, sharing life stories, eating ice cream and attending picnics. He always had a story to tell for anyone that would listen. Once he knew your name he would remember you for life. If you needed to know the name of someone, he was the resident historian as he could recall names and places of everyone he ever came into contact with. He was sharp and witty; determined and strong. He will be greatly missed; yet his legacy will carry on. Visitation will be 3:00 pm to 8:00 pm on Thursday, August 5, 2021, at Ford and Young Funeral Home in Perryville and 9:00 am to 9:40 am on Friday, August 6, 2021 at St. Vincent de Paul Catholic Church in Perryville. Funeral Mass will be 10:00 am on Friday, August 6, 2021 at St. Vincent de Paul Catholic Church in Perryville, with the Rev. Ben Melaku officiating. Burial will be at Mount Hope Cemetery in Perryville. The family prefers memorials contributions be made to American Cancer Society or the charity of your choice. Online condolences may be made at www.fordandyoungfuneralhome.com. Ford and Young Funeral Home is in charge of arrangements.

The family of Paul A. Unterreiner Sr. created this Life Tributes page to make it easy to share your memories.

Paul A. Unterreiner, 94, of Perryville, Missouri passed away...

Send flowers to the Unterreiner family.