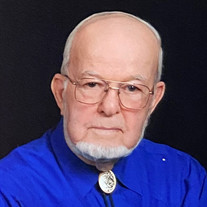 Paul E. Abernathy, 91, of Cape Girardeau, died Wednesday, May 27, 2020 at Arbor House in Cape Girardeau, MO. He was born July 14, 1928 in Crosstown, MO to Edward and Mary L. (Cox) Abernathy. He and Alma Beatrice Clifton were married November 21, 1948. She preceded him in death on December 14, 2008. Paul was a Day Foreman at Ladue School District. He was a member of New Testament Baptist Church in Sullivan and was a former member of Masonic Lodge in Perryville and Fenton. He was also a member of Scottish Rite 32nd Degree in St. Louis and Shriners Temple in St. Louis. Survivors include two daughters, Betty (Michael) Gonzalez of High Ridge and Donna (Mark) Buchheit of O'Fallon, one son, Richard (Nona) Abernathy of Jackson, one brother, Bob Abernathy of Perryville, seven grandchildren and twelve great-grandchildren. He was preceded in death by his parents, three sisters, Virgie Parrott, Velma Settelimore and Alice Rubel, three brothers, Arlous, Ivan and Wallace Abernathy. Visitation will be from 8:30 am to 10:00 am on Monday, June 1, 2020 at Ford & Young Chapel in Perryville. Service will be at 10:00 am Monday, June 1, 2020 at Ford & Young Chapel in Perryville with the Rev. Ben Chapman officiating. Burial will be in Home Cemetery. Memorial contributions may be given to Shriners Hospital in St. Louis or American Cancer Society. Online condolences may be made at www.fordandyoungfuneralhome.com. Ford & Young Funeral Home is in charge of arrangements.

The family of Paul Edward Abernathy created this Life Tributes page to make it easy to share your memories.

Send flowers to the Abernathy family.