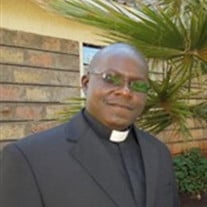 Fr. Nicholas was born on December 10, 1981, in Kangundo, Kenya to Veronica Kanini (living) and Augustine Kaloki (deceased). He was the third sibling of his four brothers and one sister. Father Nicholas loved his Kamba heritage and the land of his native Machakos Diocese, from which, as he was happy to remind others, the Church received many vocations over the decades. He was greatly loved by his family and many friends. As a child, Fr. Nicholas was active in the Parish Youth Group and was a regular altar server. He attended both elementary and secondary school in his home county of Machakos. He had lifelong interests in music, football (soccer) and swimming. An avid reader of magazines, newspapers and biographies, as well as a regular viewer of documentaries and prime time news, Fr. Nicholas fed his interest in Kenyan politics and world events. He also loved reaching out to troubled families and helping as he could. On January 3, 2005, at the age of 24, he entered the initial formation program of the Congregation of the Mission at DePaul Centre in Nairobi. Nicholas was a good student who worked hard. He was loyal to his agemates and concerned about their well-being. He was naturally shy but, at the same time, personable and approachable. He enjoyed playing soccer and analyzing Kenyan politics. Even as a student, he had a natural empathy for a poor person. He understood what it meant to be poor and desired to serve others. As he was preparing for ordination to the diaconate, Fr. Nicholas wrote in his self-evaluation: Guided by Vincentian charism, I have a deep love for the poor to whom I share the little allowance I get every month with them. Sometimes I feel bad when I see a poor person suffering and I'm not in a position to help him or her, asking God to intervene and help that poor person. Most of all, Nicholas was proud to be a Vincentian and loyal to the Community. Father Nicholas professed vows in the Congregation on September 24, 2011. Having earned the Bachelor of Arts in Philosophy (2008) and the Sacred Theology Baccalaureate (2013), he was ordained to the diaconate on May 25, 2013. For a year he ministered as a deacon at Holy Cross Parish in Thigio. Father Nicholas was ordained to the priesthood by Most Reverend Maurice Crowley, CSSp on May 24, 2015. His first assigned was to St. Vincent do Paul Church in Kamulu as Parochial Vicar (Assistant Priest) and Local Bursar. At Kamulu Parish, Father Nicholas revived the parish choir. He served there for 1½ years. Later he was assigned Pastor at Holy Cross Parish in Thigio. While at Thigio Parish, he set about the work of building outstations and schools with the help of the Christians. Many of the Christians at both Kamulu and Thigio parish can share stories of Father Nicholas's kindness and ability to work well. In 2019 Father Nicholas was assigned to the demanding but important job as Bursar (Treasurer) for the Vincentian Region of Kenya. With his gifts of organization and diligence, Father Nicholas worked with the confreres in Kenya and in Saint Louis to effectively organize the financial assets of the Community. Father's health began to fail in the Fall of 2020. As his condition worsened, the decision was made to bring him to the United States for treatment. He flew to St. Louis, MO. in mid-December 2020 and was sent to Apostle of Charity Residence in Perryville, MO. where he received excellent care from his physicians and the health care staff at Apostle of Charity, and the loving care of his older brothers in the Congregation. Father, fortified by the Sacraments that he administered so often, returned to his friend Jesus, the Evangelizer of the poor, on June 2, 2021. Friends may call from 5:00 to 7:30 pm with Vigil Service at 7:00 pm on Monday, June 7, 2021 at Mary Mother of God Chapel in Perryville. Mass will be at 10:30 am Tuesday, June 8, 2021 at Mary Mother of God Chapel in Perryville with the Rev. Patrick McDevitt, C.M. officiating. Burial will be at the Vincentian Community Cemetery in Perryville. Memorial contributions may be given to Congregation of the Missions. Online condolences may be made at www.fordandyoungfuneralhome.com. Ford and Young Funeral Home is in charge of arrangements.

Fr. Nicholas was born on December 10, 1981, in Kangundo, Kenya to Veronica Kanini (living) and Augustine Kaloki (deceased). He was the third sibling of his four brothers and one sister. Father Nicholas loved his Kamba heritage and the land... View Obituary & Service Information

The family of Rev. Nicholas Kaloki created this Life Tributes page to make it easy to share your memories.

Send flowers to the Kaloki family.