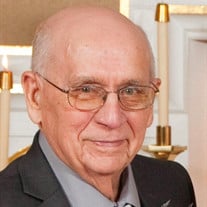 Milton O. Schlimpert, 79, of Altenburg died Saturday, January 25, 2020 at Independence Care Center of Perry County in Perryville, MO. He was born November 7, 1940 in Altenburg to Oscar J. and Lorna (Schmidt) Schlimpert. He and Mary Proffer were married on July 11, 1964. She survives in Altenburg, MO. He had been a truck driver for Shawneetown Feed & Seed. He was a member of Trinity Lutheran Church in Altenburg, Amen Bible Study and held various church offices over the years. He was a past member of Altenburg Lions Club. He was a US Army veteran of the Vietnam Era. Milton had been coach for the Babe Ruth Lions Club Baseball Team and Coach for (CTLS) Concordia Trinity Lutheran School Basketball Team. He was a Cardinal Baseball fan and loved fishing and gardening. He especially loved watching his grandchildren participate in sporting events. Other survivors include his four sons, James (Lori) Schlimpert of Altenburg, Steven (Amie) Schlimpert of Frohna, Bruce (Christi) Schlimpert of Perryville, Kris Schlimpert of Altenburg; two sisters, Audrey Schubert of Jackson, Carolyn Schlimpert of St. Louis; a sister-in-law, Kathy Schlimpert of Altenburg; six grandchildren, Emily (Jacob) Lukefahr, Natalie (Tyler) Fritsche, Meta Schlimpert, Jacob Schlimpert, Lydia Schlimpert, Dillon Schlimpert and two great-grandchildren, Chloe and Brayden Lukefahr. He was preceded in death by his parents, a sister, Marie Schlimpert and four brothers, Alvin Schlimpert, Ollie Schlimpert and twin stillborn brothers. Friends may call at Ford & Young East Perry Chapel in Altenburg on Monday, January 27 from 4:00 to 8:00 pm and on Tuesday, January 28 from 6:30 to 8:30 am. He will then be taken to Trinity Lutheran Church in Altenburg for funeral service at 10:00 AM with the Rev. Steven Dressler officiating. Burial will be at the church cemetery with military graveside honors by American Legion Post 133 and Delta Team. Memorial contributions may be given to (UCLS) United in Christ Lutheran School or Legacy Hospice. Online condolences may be made at www.fordandyoungfuneralhome.com. Ford & Young Funeral Home is in charge of arrangements.

The family of Milton O. Schlimpert created this Life Tributes page to make it easy to share your memories.

Send flowers to the Schlimpert family.