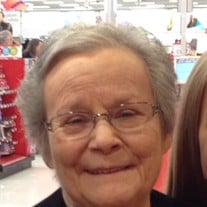 Mildred C. "Millie" Bollinger, 70, of Perryville, died Thursday, January 9, 2020 at Independence Care Center in Perryville. She was born August 13, 1949 in Kaskaskia, IL. to Russell and Rose (Grabe) Brown. Millie and Doug Bollinger Sr. were married March 22, 1968. He preceded her in death on July 24, 2008. Millie worked at Wal-Mart and retired after 40 years of service. She was of the Christian Faith. She enjoyed spending time with her grandchildren, painting and using her artistic abilities to create and share with others. Millie was a passionate animal lover especially of her 5 beloved cats. Survivors include two sons, Doug (Marci) Bollinger Jr. of Batesville, MS, and Tony (Tammy) Bollinger of Perryville, three sisters, Margaret Adams of Perryville, Louise (Harold) Brown of St. Mary and Sherry (Dale) Clifton of Perryville, one brother, Scott (Jan) Brown of Perryville, ten grandchildren, Megan, Sophie, Owen, Faith, Hannah, Chloe, Eloise, Nelson, Reuben and Cyrus Bollinger. She was preceded in death by her parents, one sister, Maxine Messmer and one brother, Earl Brown. Friends may call 3:00 PM to 8:00 PM on Monday, January 13, 2020 at Ford & Young Chapel in Perryville. Service will be at 7:00 PM Monday, January 13, 2020 at Ford & Young Chapel in Perryville. In lieu of flowers Memorial contributions may be given for family use. Online condolences may be made at www.fordandyoungfuneralhome.com. Ford & Young Funeral Home is in charge of arrangements.

The family of Mildred C. "Millie" Bollinger created this Life Tributes page to make it easy to share your memories.

Send flowers to the Bollinger family.