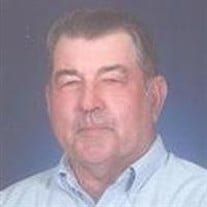 Marvin Paul Grebing, 75, of Altenburg, died December 11, 2012 at his daughter&#8217;s residence in Bollinger County, MO He was born on January 29, 1937 in Altenburg, MO, son of Paul Jacob and Esther (Weinhold) Grebing. He and Beverly Wiggins... View Obituary & Service Information

The family of Marvin Paul Grebing created this Life Tributes page to make it easy to share your memories.

Send flowers to the Grebing family.