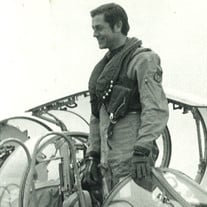 Manfred Rindl, 81, of Perryville, Missouri passed away Friday, October 9, 2020 at St. Francis Medical Center in Cape Girardeau. Manny Rindl is now in the presence of his Maker surrounded by angels, family, friends, comrades and all the love ones who have passed before him. He was born December 23rd 1938 in the small Bavarian village of Holzkirchen (Wood Church) to Anna and Hans Rindl. His birth was followed by his younger brother, Diethard. He is survived by his loving wife, Dianna, his nephew, Manfred Rindl, his brother-in-law, Wallie (Barbara) Breig, his cousins and his faithful canine companion, Morgan. Manny joined the Luftwaffe when he was 19. He became a military pilot rising to the rank of Major. He trained extensively in the United States and met the love of his life while training in Lubbock, Texas. They subsequently married in Munich on May 16, 1963. Manny flew numerous classified recon NATO missions in his Lockheed 104 Starfighter. After breaking his ankle in Sicily, he decided to retire from the military. Post retirement Dianna and Manny moved to America and bought Plaza Gifts in Winterpark, Colorado. They subsequently opened two more stores, the Christmas Shop and the T-Shirt Shop. Through long hours and hard work they built successful and profitable businesses. They used their accumulated savings to invest in local apartments, land and even a railroad car. They sold their businesses and real estate retiring again to Perryville and their winter home in Cape Coral, Florida. Manny loved flying, boating, canoeing, skiing, cycling, soccer, ice hockey, country and blues music, traveling and dogs. His true character was revealed when playing with his dogs. He was their Alpha dog. He loved them and they loved him. If you feel a rumble in the ground and hear a sonic boom, look up. It will be Manny coming out of a huge white cumulus cloud in his Starfighter twisting, turning, and looping. He is saying hello and telling you he is still with us and like a good sheepdog he is watching over us. May Manny rest in peace. Online condolences may be mad at www.fordandyoungfuneralhome.com

Manfred Rindl, 81, of Perryville, Missouri passed away Friday, October 9, 2020 at St. Francis Medical Center in Cape Girardeau. Manny Rindl is now in the presence of his Maker surrounded by angels, family, friends, comrades and all the love... View Obituary & Service Information

The family of Manfred Rindl created this Life Tributes page to make it easy to share your memories.

Send flowers to the Rindl family.