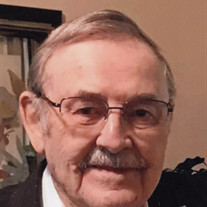 Louis "Lou" W. Meyer, 84, of Perryville, Missouri died Wednesday, July 31, 2019 at Independence Care Center in Perryville. He was born December 2, 1934 in Farrar, MO to Gottfried Leo "Fritz" and Esther (Bachmann) Meyer. He and Shirley (Hennemann) Meyer were married October 12, 1957 at St. Mary's of the Barrens Church in Perryville for 62 years. He was a member of Immanuel Lutheran Church, American Legion Post 133 and AmVets Post 94. Lou was a US Army Korean Veteran. He was owner/manager of Meyer Bus Line and Fallert Bus Service for many years. Lou was a past member of National School Transportation Association and Missouri School Bus Contractors Association. He served as Perry County Presiding Commissioner for 12 years. He was a past board member of Southeast Missouri Regional Planning Commission and First State Community Bank. He was a past member of Perryville Development Corp and Co-Owner of Perryville Best Western Motel. Past owner/operator of Meyer Taxi Service and M & H Texaco. Survivors include his one son, David (Donita) Meyer of Fenton, one daughter, Christine (Brad) Moll of Perryville, one sister, Ann (Keith) Hazelwood of St. Charles, MO. Seven Grandchildren, Amber Meyer and friend Stewart Kirchhoff, Natalie (Matt) Edwards, Haley (Lee) Neumann, Jen (Andy) Irwin, Casey Stark and friend Tim Patton, Jocelyn Moll and Benjamin (Chelsea) Moll. Ten Great Grandchildren. Also survived by numerous nieces and nephews. He was preceded in death by his parents and three sisters: Shirley Petzoldt, Betty Franklin and Marilyn Kempfer. Visitation will be from 4:00 PM to 8:00 PM on Sunday, August 4, 2019 and on Monday from 6:30 AM - 8:30 AM at Ford & Young Funeral Home in Perryville. Service will be at 10:00 AM Monday, August 5, 2019 at Immanuel Lutheran Church in Perryville with Rev. Joseph Schlie officiating. Entombment will be at Mary Queen of Heaven Mausoleum at Mount Hope Cemetery in Perryville with military honors provided by American Legion & Delta Team. Memorial contributions may be given to Immanuel Lutheran Church or Crown Hospice. Online condolences may be made at www.fordandyoungfuneralhome.com. Ford & Young Funeral Home is in charge of arrangements.

The family of Louis W. Meyer created this Life Tributes page to make it easy to share your memories.

Send flowers to the Meyer family.