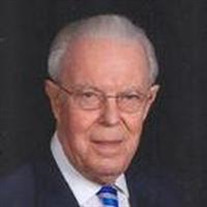 Lonnie L. Sauer, 92, of Perryville, MO died November 11, 2012 at Perry Oaks Nursing and Rehabilitation in Perryville, MO. He was born on February 17, 1920 in Apple Creek, MO, son of Ferd and Rosa (Leible) Sauer. He and Lorene A. Gebhardt were... View Obituary & Service Information

The family of Lonnie L. Sauer created this Life Tributes page to make it easy to share your memories.

Send flowers to the Sauer family.