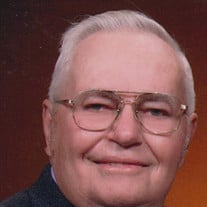 Larry W. Steffens, 88, of Frohna, died Saturday, March 14, 2020 at Independence Care Center in Perryville, MO. He was born October 13, 1931 in Wittenberg, MO. to Ferdinand Edward and Emma L. (Koenig) Steffens. He first married Lorene R. Schuessler and she survives in Arnold, MO. He then married Lorna G. Weber on June 8, 1968 and she preceded him in death on October 6, 2012. He then married Ruby (Meyr) Koenig on November 28, 2015 and she preceded him in death on Januray 6, 2018. Larry was a truck driver for East Perry Lumber Company. He was a member of Concordia Lutheran Church, Men's Club and Church Elder. He was on the Saxon Lutheran Memorial advisory board. He was also an alderman for the city of Frohna. He enjoyed camping and fishing. Survivors include his two daughters, Bonnie (Clyde) Meyer of Arnold, and Sarah (Donnie) Stueve of Frohna, two sons, Cary Steffens of St. Louis and Randolph (Diana) Steffens of Bonne Terre, two step-sons, Thomas (Gail) Clampitt of Jackson and Terry (Connie) Clampitt of Marion, Illinois, one step-daughter, Kathy Osmus of Oklahoma City, Oklahoma one sister, Geraldine Kaufmann of Uniontown, three brothers, Vernon (Betty) Steffens of Perryville, Kenneth (Lorna) Steffens of Frohna and Melbert (Sandy) Steffens of Imperial, fifteen grandchildren and sixteen great-grandchildren. He was preceded in death by his wives, parents, one infant son, Tommy Steffens, one sister, Vera Noennig and one brother, Clinton Steffens. Visitation will be from 4:00 pm to 8:00 pm on Monday, March 16 and from 6:30 am - 10:00 am at Concordia Lutheran Church in Frohna. Service will be at 10:00 am Tuesday, March 17, 2020 at Concordia Lutheran Church in Frohna with Rev. Paul Hoemann officiating. Burial will be at Concordia Lutheran Cemetery in Frohna. Memorial contributions may be given to Concordia Lutheran Church or Saxon Lutheran Memorial. Online condolences may be made at www.fordandyoungfuneralhome.com. Ford & Young Funeral Home is in charge of arrangements.

The family of Larry W. Steffens created this Life Tributes page to make it easy to share your memories.

Send flowers to the Steffens family.