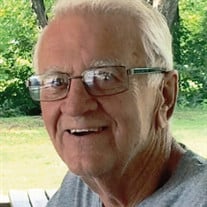 Kenneth J. Paulus, 84, of Perryville, died peacefully Saturday, November 9, 2019 at Independence Care Center in Perryville, surrounded by his loving family. He was born April 1, 1935 in Perryville, MO to Leo B. and Mildred (Claussen) Paulus. He married his high school sweetheart, Patricia Zoellner on June 29, 1957. She survives in Perryville. Kenneth was a 1953 graduate of St. Vincent High School and a 1964 graduate of Southeast Missouri State University. He was a teacher and coach at St. Vincent de Paul High School in Perryville and Chester High School in Chester, IL. He was loved and respected by the many lives he touched as a school teacher, coach and friend. He was a member of St. Vincent de Paul Catholic Church, Knights of Columbus 4th Degree, American Legion, and St. Vincent Alumni Association. He was an inaugural member of the SV Alumni Association Hall of Fame as well as many other honors through his life and career. He was a US Army Veteran. Survivors include his daughter, Mary Paulus-Schremp of Perryville, four sons, Tom (Leslie Cipolla) Paulus of Manchester, MA, Tim (Sandy Ruessler) Paulus of Perryville, Dave (Toni Broeker) Paulus of Fenton and Rich Paulus of Perryville, two sisters, Mary Dyer of Conway, Arkansas, Elta Cattoor of Perryville, six brothers, Roger Paulus, Russell "Rut" Paulus and Albert (Mick) Paulus all of Perryville, Jim Paulus of St. Louis, Harold Paulus and Bob Paulus both of Columbia, MO, seven grandchildren, Stephanie Schremp, Tyler Paulus, Danielle Schremp, Sierra Etzold, Nicholas Schremp, Kennedy Paulus and Ellie Paulus and six great-grandchildren. He was preceded in death by two brothers, Bernard (Booze) Paulus and Oliver (Obie) Paulus and two sisters, Eileen Paulus and Pauline Paulus Tucker. He was an inspiration and role model to many. His family was his greatest joy. An avid outdoors man who loved to hunt and fish, he always "caught his limit" and spent many hours enjoying his time in nature with his children and grandchildren, and especially his good buddy, Gene Conte. Ken loved playing cards with his brothers and excelled at games of Pitch and Pinochle, which were taught to him by his father, but somehow never found a winning hand playing Old Maid, Go Fish or Rummy with his grandkids, who he loved so dearly. Visitation will be from 4:00 PM to 8:00 PM on Wednesday, November 13, 2019 and Thursday from 6:30 AM until time of Mass at 12:00 noon at St. Vincent de Paul Catholic Church in Perryville. Funeral Mass will be at 12:00 noon Thursday, November 14, 2019 at St. Vincent de Paul Catholic Church in Perryville with Rev. Joe Geders officiating. Burial will be at Mount Hope Cemetery with military honors provided by American Legion and the US Army. Memorial contributions may be given to St. Vincent Educational Foundation and Alzheimer's Association. . Online condolences may be made at www.fordandyoungfuneralhome.com. Ford & Young Funeral Home is in charge of arrangements.

Kenneth J. Paulus, 84, of Perryville, died peacefully Saturday, November 9, 2019 at Independence Care Center in Perryville, surrounded by his loving family. He was born April 1, 1935 in Perryville, MO to Leo B. and Mildred (Claussen) Paulus. He... View Obituary & Service Information

The family of Kenneth J. Paulus created this Life Tributes page to make it easy to share your memories.

Send flowers to the Paulus family.