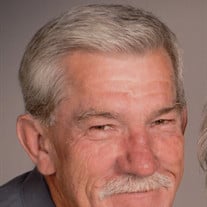 Kenneth C. Burroughs, 67, of Altenburg, MO died Sunday, December 29 at St. Francis Medical Center in Cape Girardeau, MO. He was born February 10, 1952 in Cape Girardeau, Missouri to Albert and Elda (Perr) Burroughs. He and Colleen Palisch were married April 13, 1974. She survives in Altenburg, MO. He enjoyed spending time with his family and friends. He was retired from Chrysler. He was a member of the Immanuel Lutheran Church in Altenburg where he served as Trustee. He was a member of the church dartball team and enjoyed sports with his children and grandchildren. He enjoyed working outside, gardening, and following the St. Louis Cardinals and the Mizzou Tigers. Other survivors include his daughter, Tessa Burroughs of Altenburg, MO; three sons, Justin (Karissa) Burroughs of Omaha, NE, Ryan (Leslie) Burroughs of Lake St. Louis, MO, Dane Burroughs of Altenburg, MO; three brothers, Gerold Burroughs of St. Mary, MO, Jerry (Shirley) Burroughs of Frohna, MO, Ilmer (Connie) Burroughs of Frohna, MO; and six grandchildren, Addison, Ashton, Anabelle, Blair, Brody and Sloane. He was preceded in death by his parents; one brother, Edgar Burroughs; one sister, Erna Kemetty; and one grandson, Gabriel. Friends may call at Ford & Young East Perry Chapel in Altenburg on Thursday, January 2 from 4:00 to 8:00 pm and on Friday, January 3 from 6:30 to 8:30 am. He will then be taken to Immanuel Lutheran Church in Altenburg for funeral service at 10:00 am with the Rev. Frank Lucas officiating. Burial will be at the church cemetery. Memorial contributions may be given to Immanuel Lutheran Church in Altenburg or American Cancer Society. Online condolences may be made at www.fordandyoungfuneralhome.com. Ford & Young Funeral Home is in charge of arrangements

The family of Kenneth C. Burroughs created this Life Tributes page to make it easy to share your memories.

Send flowers to the Burroughs family.