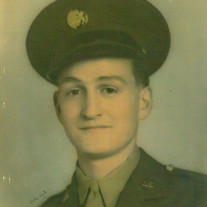 Kelly R. Pruett, 96, of Perryville, died Saturday, June 22, 2019 at the Missouri Veterans Home in Cape Girardeau, MO. He was born September 3, 1922 in Waverly, Tennessee to Louis H. and Emma E. (Hedge) Pruett. He and Georgia Louise Mathis were married September 4, 1948. She preceded him in death on August 2, 2014. He was a US Army WW II Veteran. He was Sales Rep for Witte Hardware. He was a member of United Methodist Church, Optimist Club and American Legion. Survivors include his five sons, Darryl (Linda) Pruett of Hideaway, Texas, Kenny (Katie) Pruett of Columbia, Missouri, Tim (Cindy) Pruett of Maryland Heights, Missouri, Wes (Kim) Pruett of Perryville, Missouri, Keith Pruett of Las Vegas, Nevada and four daughters, Sherry (Tom) Nanney of Overland Park, Kansas, Linda Pruett of Jackson, Missouri, Annette(Mark) Werner of Jackson, Missouri, Lisa (Mark) Moll of Wildwood, Missouri, sixteen grandchildren and seventeen great-grandchildren. He was preceded in death by his parents, wife, three brothers; Jim Pruett, Cooley Pruett and Willard Pruett, sister, Annie Lou and twin sister: Nellie May and one great-grandchild. Friends may call 4:00 PM to 8:00 PM on Thursday, June 27, 2019 at Ford & Young Chapel in Perryville and from 6:30 AM until time of Service at 10:00 AM on Friday. Service will be at 10:00 AM Friday, June 28, 2019 at Ford & Young Chapel in Perryville with the Rev. Roger Cary officiating. Burial will be in Home Cemetery with military honors provided by American Legion & Delta Team. Memorial contributions may be given to Missouri Veterans Wall or Missouri Veterans Home. Online condolences may be made at www.fordandyoungfuneralhome.com. Ford & Young Funeral Home is in charge of arrangements.

The family of Kelly R. Pruett created this Life Tributes page to make it easy to share your memories.

Send flowers to the Pruett family.