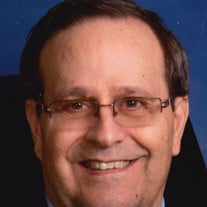 Karl Joel Klaus, 71, of Perryville, Missouri passed away Tuesday, February 23, 2021 in St. Louis, Missouri. He was born September 22, 1949 in Ironton, Missouri to Harold and Martha (Guelzow) Klaus. He and Diane Rhodes were married January 31, 1969 in San Diego, CA. She survives in Perryville. He served in the United States Marine Corps and was a graduate of the University of Missouri. Karl was dedicated to serving the Perry County community throughout his life. He was a member of Immanuel Lutheran Church in Perryville and was the owner of Klaus Construction. He was on the board of directors of both The Bank of Missouri and also Citizens Electric Corporation. Karl served as a past president of the Perryville Development Corporation and also of the Immanuel Lutheran School Board. Karl was one of the founders of the Perryville Optimist Soccer League. He was Presiding Commissioner of Perry County from 1986 to 1998 and was a member of the American Legion Post #133. Survivors include children, Katherine Klaus, Kristopher (Kristen) Klaus and Laura (Tom) Klaus Reed; four brothers, Harold (Betty) Klaus Jr., Gene (Mary Elizabeth) Klaus, Paul (Pam) Klaus and Kurt (Gina) Klaus; one sister, Kristina Robin (Tom) McManus; and seven grandchildren, Aiden Johnson, Annie Johnson, Henry F. Klaus, Lily Klaus, August Klaus, Harper Reed and Hudson Reed. He was preceded in death by his parents. At the family's request there will be no public viewing or receiving line. Funeral Service will be open to the public at 11:00 am Friday, February 26, 2021 at Immanuel Lutheran Church in Perryville with the Rev. Joseph Schlie officiating. The family has asked to please wear a mask. Graveside Service will be private for the family. Burial will be at Immanuel Lutheran Cemetery with the American Legion #133 and U.S. Marine Corp. Honors Team. Memorial contributions may be given to Immanuel Lutheran School, Immanuel Lutheran Tuition Fund or Messiah Lutheran School in Weldon Springs, Missouri. Online condolences may be made at www.fordandyoungfuneralhome.com. Ford and Young Funeral Home is in charge of arrangements.

The family of Karl Joel Klaus created this Life Tributes page to make it easy to share your memories.

Send flowers to the Klaus family.