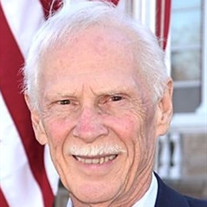 Joseph Webb, 81, of Perryville, Missouri died Tuesday, March 24, 2020 at his home in Perryville, MO. He was born January 5, 1939 in St. Louis, Missouri to Frank and Mary Belle (Green) Webb. He and Shirley Marie Sutterer were married September 4, 1965. She survives in Perryville, MO. Joseph was a school teacher and public defender before going into private practice. He dedicated his legal career to serving the injured and disabled and was a founding partner of The Webb Law Firm where he worked until his retirement in 2014. He was a member of American Legion Post 133, Missouri Bar Association, Missouri Association of Trial Attorneys and Aircraft Owners and Pilots Association. He was a veteran of the US Marine Corp and US Air Force. Survivors include one daughter, Sarah (Doug) Elfrink of Cape Girardeau; one son, John (Jessica Dobin) Webb of St. Louis; five siblings, Eugene (Carol) Webb of Highland, IL, John David (Barbara) Webb of St. Louis, MO, Carol (Kenneth) Jewell of Kosh Konong, MO, Jack (Debbie) Webb of St. Louis, MO, Jill (John) Clubbs of Doniphan, MO; and one granddaughter, Jourdan (Dakota) Broeker. Also survived by many nieces, nephews, cousins and brothers-in-law and sisters-in-law. He was preceded in death by his parents; two sisters and a brother-in-law, Janet Bowers and Joy and Tom Comeau. In lieu of flowers memorial contributions may be given to The Society of St. Vincent DePaul or New Life Mission Inn. Online condolences may be made at www.fordandyoungfuneralhome.com. Ford & Young Funeral Home is in charge of arrangements.

The family of Joseph Webb created this Life Tributes page to make it easy to share your memories.

Send flowers to the Webb family.