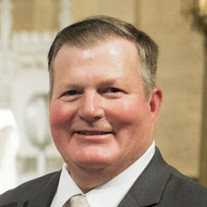 John Stephen Vogel, son of Donald Willard and Mildred Mary Lottes Vogel, was born, March 5, 1955 in Perryville, Missouri. He departed this life, November 6, 2019, peacefully at his home in Sunrise Beach, Missouri at the age of sixty four years, eight months and one day. He was preceded in death by his parents and his brother Michael Vogel. He is survived by his children, United States Air Force Major John Stephen Vogel, Jr. and wife Joy of Phoenix, Arizona, and Chelsea Marie Vogel of St. Louis, Missouri,; grandchildren, John Arthur and Emma Grace Vogel,; mother of his children, Jeanne Lattinville-Vogel of St. Louis, Missouri,; siblings, Ann Kornbelt and husband Don of St. Louis, Missouri, Mary Kay Sauer and husband Dave of Perryville, Missouri, Jane Cooper and husband Chip of Columbia, Missouri, Joseph Vogel and wife Jaime of Florida, Jean Moore and husband Donnie of Kansas City, Missouri, and sister-in-law, Gail Clare of Kansas City, Missouri,; and a host of nieces, nephews, other relatives and many friends. John was raised in Perryville, until attending pharmacy school at St. Louis College Pharmacy and graduating in 1978. He was a long time resident of Chesterfield, Missouri. John was very active in his kids lives from being a Scout Leader as an accomplished Eagle Scout in the Boy Scouts of America to coaching his kids in the various sports they played. John made a profession of the Catholic faith and was a member of Ascension Church in Chesterfield, Missouri. In his spare time he enjoyed golfing, hunting, woodworking and cooking. Most of all he enjoyed spending time with his family. He was a loving father, grandfather, brother, son, uncle and a caring neighbor and friend to many. We celebrate his life and his accomplishments and will treasure the memories he created for his family and friends. Visitation will be held on Saturday, November 16, 2019 from 10:00AM to 12:00PM CST and mass will be begin at 12:00PM CST both at Saint Vincent DePaul Catholic Church in Perryville, Missouri with Rev. Rich Wehrmeyer officiating. Burial will follow at Mount Hope Cemetery in Perryville, Missouri. A celebration of his life will follow the burial at the RFC Banquet Center. Memorial donations may be made to the Gary Sinise Foundation honoring our defenders, veterans, first responders, their families, and those in need online at www.garysinisefoundation.org/donate or they may be left at the Saint Vincent DePaul Catholic Church. Online condolences may be made at www.fordandyoungfuneralhome.com Arrangements are under the direction of Ford & Young Funeral Home in Perryville, Missouri.

The family of John Stephen Vogel created this Life Tributes page to make it easy to share your memories.

Send flowers to the Vogel family.