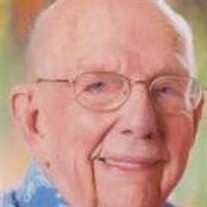 Jerome “Jerry” Floyd Moonier, age 91, of Overland Park, Kansas, passed away on December 24, 2012 at the Kansas City Hospice House.He was born in Perryville, Mo on May 27, 1921 to Sylvester and Mary Genevieve Moonier, whose love and example was the foundation for his life as a devout Catholic. He graduated from St. Vincent’s High School and continued on to Southeast Missouri State College before enlisting in the Navy on May 17, 1942, attending flight school at St. Simon’s Island, Georgia to become a pilot during World War II.Jerry was united in marriage to Helen Fallert on April 19, 1947; they were married 65 wonderful years.Jerry worked for Curtis Wright Aircraft in St. Louis and then owned a plumbing company in Perryville where he became close to his lifelong friend, Urban Meyer. Next, he was hired by the FAA in St. Louis to become an Air Traffic Controller and then Deputy Chief of the Tower at Lambert Field in St. Louis, thus cementing his love of aviation. He and his wife Helen retired in 1974 moving to Sarasota, Florida to enjoy 33 years of fun in the sun with lots of golf, swimming, biking, running, beach time and friends. Jerry enjoyed family, friends, eating and many hobbies that included all kinds of physical exercise.In addition to his wife, Jerry is survived by his daughters, Jane Hudson and husband Chuck of St. Louis, Judi Roling and husband Steve of Kansas City, Joyce Niewendorp and her husband Clark of Portland, and his son Jim Moonier and his wife Lisa of Hawaii; his siblings Sr. Mary Genevieve Moonier of California, his brother Joseph Moonier of Alton, Illinois; grandchildren Stephanie, Susie, Jennifer, Brian, Eric, Jesse and Max and great-grandchildren Eli, Luci, Isabelle and Juliette, along with many nieces, nephews and other family and friends.He is preceded in death by his parents, Sylvester and Mary Genevieve Moonier, his brother, Zeno Moonier, sister, Rita Moonier Sutterer and nephew Donald Donze. Jerry’s family wishes to thank the staff at the Atriums, the KC Hospice House, the staff at St. Joseph Health Center, Dr Wendland, Kathy, Dr. Mancuso, Shelly and Dr. Smith for all their wonderful care over the years. In lieu of flowers, the family suggests donations to the Kansas City, Hospice House, 12000 Wornall Road, Kansas City, Mo. 64145Services will be held at St. Vincent’s DePaul Parish, 1000 Rosati Court, Perryville, MO. 63775. Fr. Steve Gallegos will be officiating at a Mass of Christian Burial at 2:30 pm. on Friday, December 28, 2012. Visitation will be held at the Church from 1:30-2:30 immediately preceding the Mass. Burial will follow at the Valle Springs Cemetery in Ste. Genevieve, Mo. Funeral arrangements are being handled by Young & Sons Funeral Home in Perryville, Mo.

The family of Jerome Floyd Moonier created this Life Tributes page to make it easy to share your memories.

Send flowers to the Moonier family.