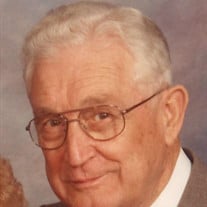 James "Jim" D. Taylor, 95, of Perryville, Missouri passed away Thursday, September 30, 2021 at Independence Care Center in Perryville. He was born January 12, 1926 in Alton, Missouri to Ambrose Leander and Mary Nancy (Roberts) Taylor. He and Mildred "Lou" Terry were married May 9, 1947 in Alton, Missouri. She survives in Perryville. Jim served in WWII with the United States Army Air Force. He worked for the University of Missouri Extension Service and the US Department of Agriculture. He also served as the Public Administrator of Perry County for eight years. He was a member of the United Methodist Church in Perryville, the American Legion Post #133 and the National Association of Retired Federal Employees. Survivors include his wife, Lou Taylor; two sons, Randy (Patti) Taylor of Perryville, MO and Jim (Patty) Taylor of Columbia, MO; two daughters, Terry (Michael) Wengert and Stephanie Taylor both of Perryville, MO; nine grandchildren; and 23 great grandchildren. He was preceded in death by his parents; three brothers and four sisters, Dwight Taylor, Evan Taylor, Lee Taylor Jr., Theta Ross, Allie Paglia, Ruby Haldiman and Rita McDowell. Visitation will be 4:00 pm to 7:00 pm on Monday, October 4, 2021 and 8:00 am until time of service on Tuesday, October 5, 2021 at United Methodist Church in Perryville. Funeral Service will be at 10:00 am Tuesday, October 5, 2021 at United Methodist Church in Perryville with the Rev. Kevin Barron officiating. Burial will be at Home Cemetery in Perryville with military honors provided by the U.S. Air Force and American Legion Post #133. In lieu of flowers memorial contributions may be given to United Methodist Church, Perryville, Missouri. Online condolences may be made at www.fordandyoungfuneralhome.com. Ford and Young Funeral Home is in charge of arrangements.

The family of Jim D. Taylor created this Life Tributes page to make it easy to share your memories.

Send flowers to the Taylor family.