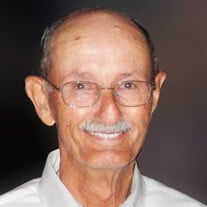 James J. Bohnert, 94, of Perryville, died Thursday, March 5, 2020 at his residence in Perryville. He was born October 31, 1925 the son of John and Sarah (Bohnert) Bohnert. He and Rose A. Gibbar were married January 17, 1948. She preceded him in death on February 23, 2000. JJ was an avid hunter and bird watcher. He enjoyed playing cards and was known to bid a bit recklessly. He loved being with his family. Reading and traveling were his favorite things to do. He was a former pilot and lived to tell the tale. He thoroughly enjoyed all of his nine lives. He was a plumber and pipe fitter. He was a member of St. Vincent de Paul Catholic Church, Plumber and Pipe Fitters Union, Knight of Columbus, Perryville Elks Lodge and American Legion. He was a US Navy Veteran of WW II Pacific Arena. Survivors include eight daughters, Gail Bohnert (Fahad Aljarbou) of New York City, Joyce (David) Soto and Lois (Patrick) Prost all of Perryville, Colyn (Kevin) Wibbenmeyer of Sikeston, Tracy (Thomas) Prost and Peggy (Robert) Welker all of Perryville, Penny (Dale) Schwent of Schaumburg, Illinois and Jaye (Larry) Mier of West Bend, Wisconsin; long time companion Sharon Baudendistel; two sisters, Laura Bert of Perryville and Dorothy Otte of St. Louis, twenty-four grandchildren, thirty-four great grandchildren and two great-great-grandchildren. He was preceded in death by his parents, one sister, Trula Huber and four brothers, Melbourne, Robert, Harry and Linus Bohnert. Friends may call from 9:00 to 10:30 am on Saturday, March 14, 2020 at St. Vincent de Paul Catholic Church in Perryville. Memorial Mass will be at 10:30 am Saturday, March 14, 2020 at St. Vincent de Paul Catholic Church in Perryville with Rev. Joe Geders C.M. co-officiating. Burial in Mount Hope Cemetery. In lieu of flowers, memorial contributions may be given to St. Vincent de Paul School. Online condolences may be made at www.fordandyoungfuneralhome.com. Ford & Young Funeral Home is in charge of arrangements.

The family of James J. Bohnert created this Life Tributes page to make it easy to share your memories.

Send flowers to the Bohnert family.