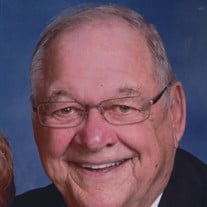 Howard "Jr." M. Krauss, 77, of Perryville, passed away Saturday, November 14, 2020 at Perry County Memorial Hospital in Perryville, Missouri. He was born September 16, 1943 in Friedenberg, MO to Howard W. and Loretta C. (Morrison) Krauss. He and Charlotte J. Verseman were married March 28, 1965 in Farrar, Missouri. She survives in Perryville, Missouri. Jr. was a life long truck driver. He drove for Rollet Brothers Trucking and later for Gilster Mary-Lee, until he retired in 2014. He was an avid lover of Cardinals baseball. After retirement Jr. was able to spend more time with his family. He loved vacationing in Branson, especially with his family. His grandchildren were his pride and joy. He loved seeing his grandkids and watching them play various sports. He is now resting in the loving arms of our Savior. He was a member of Immanuel Lutheran Church in Perryville, MO. Other survivors include three sons, Greg (Christy) Krauss of Brazeau, MO, Andy (Susan) Krauss of Longtown, MO, Tyson (Missy) Krauss of St. Louis, MO; a daughter, Stephanie (Craig) Brown of Perryville, MO; a sister, Ann Welker of Longtown, MO; two brothers, Jerry (Laverne) Krauss, Kenneth (Ann) Krauss all of Perryville; eight grandchildren Taylor (Seth) Stevens, Jared (Jessica) Krauss, Levi, Liam, Addy, and William Krauss, Eli and Isabel Brown; one great-granddaughter, Sloane Stevens; four brothers-in-law, Donnie (Doris) Verseman of Perryville, Dennis (Kathy) Verseman of Northville, Michigan, Alan Verseman of Farrar, Edgar Roth of Perryville and several nieces and nephews. He was preceded in death by his parents, one brother-in-law, Donald Welker and two sisters-in-law, Linda Verseman and Betty Roth. Friends may call at Ford and Young Funeral Home in Perryville on Sunday, November 22 4:00 to 8:00 pm and on Monday, November 23 from 6:30 to 8:30 am. He will then be taken to Immanuel Lutheran Church in Perryville for funeral service at 10:00 am with the Rev, Matthew Marks officiating. Burial will be at Immanuel Lutheran Cemetery in Perryville, MO. Memorial contributions may be given to Saxony Lutheran High School or Immanuel Lutheran Radio Broadcast. Online condolences may be made at www.fordandyoungfuneralhome.com. Ford and Young Funeral Home is in charge of arrangements.

The family of Howard M. Krauss Jr. created this Life Tributes page to make it easy to share your memories.

Send flowers to the Krauss family.