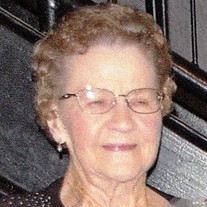 Hildegard Lillian Guth, 99, of Perryville died Monday, November 4, 2019 at Independence Care Center of Perry County in Perryville, MO. She was born October 29, 1920 in Farrar, Missouri to Frederick H. and Mary (Lorenz) Verseman. She and Vernon O. Lohmann were married on February 23, 1952. He preceded her in death on September 23, 1975. She later married Lloyd Guth on October 15, 1976. He preceded her in death on March 31, 1996. She had been a cook at American Care Center and Independence Care Center of Perry County. She was a member of Immanuel Lutheran Church, LWML, and Chancel Guild. She loved gardening, sewing, canning, and taking care of her family. Survivors include her one son, Terry (Mary) Lohmann of Perryville; two daughters, Pattie (Bruce) Akers and Karen (Kevin) Emmendorfer all of Perryville; one sister, Lois Jean Mueller of Perryville; one brother, Homer Verseman of Crystal Lake, Illinois; four step-sons, Bill (Judy) Guth of Cape Girardeau; Bob (Wanda) Guth of Arizona; Ed (Beth) Guth and Tom (Nancy) Guth all of Perryville; eight grandchildren; fourteen great-grandchildren; one great-great-granddaughter; and many step-grandchildren. She was preceded in death by her parents; both husbands; one son Allen Lohmann; two sisters, Vera Schulte and Dorothy Koenig; one brother, Milton Verseman; one great-grandson and one great-granddaughter. Friends may call at Immanuel Lutheran Church in Perryville, on Saturday, November 9 from 10:00 AM until time of service at 2:00 PM with the Rev. Matthew Marks officiating. Burial will be at the Salem Lutheran Cemetery in Farrar with Rev. Roger Abernathy officiating. Memorial contributions may be given to St. Jude's Children's Hospital. Online condolences may be made at www.fordandyoungfuneralhome.com. Ford & Young Funeral Home is in charge of arrangements.

The family of Hildegard Lillian Guth created this Life Tributes page to make it easy to share your memories.

Send flowers to the Guth family.