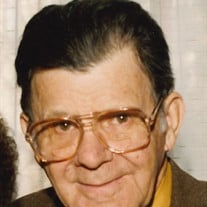 Henry William Scholl, 93, of Altenburg, Missouri, died Thursday, August 19, 2021 at Independence Care Center in Perryville. He was born August 26, 1927 in Cape Girardeau County to Oscar William Scholl and Esther A. Walther Scholl. Henry and Dolores Lungwitz were married on June 29, 1947. They had celebrated 56 years of marriage before her death in 2003. Henry began working at a young age, and worked as a Maintenance Away Heavy Equipment Operator for railroad companies including the Frisco Line and the Burlington Northern and Santa Fe for 37 years, retiring in 1989. After retirement, Henry was renowned throughout Altenburg and the surrounding region for harvesting and cracking pecans, walnuts and hickory nuts to share with his friends and neighbors. He was a big fan of the St. Louis Cardinals, and enjoyed reading and doing crossword puzzles and Sudoku. Survivors include six children: Darrell and Pat of Weatherford, Texas; Duane of Altenburg; Roy of Suffolk, Virginia; Terry "Lin" and Fran of Altenburg; Susan Delores of St. Louis, Missouri; and Teddy and Deb of Jackson, Missouri; seven grandchildren: Lisa Kleiber and Courtney Knowles of Texas; Andrew, Jacob, Amanda and Joshua Scholl of Missouri; and Crystal Nibarger of Virginia. There are fourteen great-grandchildren, with two others expected this fall. Henry is also survived by three brothers and nine sisters, as well as numerous nieces and nephews. Henry was preceded in death by his wife, his parents and two brothers. The family wishes to thank the Independence Health System over the past five years, and Crown Hospice staff these past four months, for their support and care. Henry's quality of life was improved by your efforts. Visitation will take place at the Ford and Young chapel in Altenburg on Tuesday, August 24, 2021, from 4 until 8 pm. Masks are required. Private services for the family will be held at a later date. In lieu of flowers, contributions to the charity of choice are appreciated. Ford and Young Funeral Home is in charge of arrangements.

The family of Henry W. Scholl created this Life Tributes page to make it easy to share your memories.

Send flowers to the Scholl family.