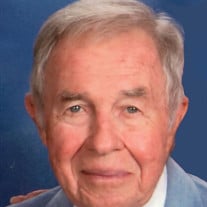 George Franke, 85, of Perryville, Missouri passed away Tuesday, February 15, 2022 at Holiday Residential Care. He was born February 23, 1936 in Uniontown, MO to Albert and Leola (Kassel) Franke. He and Luella Koenig were married February 21, 1959. George served in the United States Army and Army Reserve. He received a bachelors degree in Civil Engineering from University Missouri Science & Technology in 1959. George was a member of Grace Lutheran Church in Uniontown. He worked for the Kentucky Transportation Cabinet-Department of Highways for 37 years serving in positions from Assistant Resident Engineer to Director of Equipment for the State of Kentucky. He was a member of the Society of Professional Engineers, Kentucky Association of Transportation Engineers, and Kentucky Engineering Exposure Network. Mr. Franke was a scoutmaster and received the District Award of Merit. He is also in Who's Who in Kentucky, Who's Who in Southeast United States, and Who's Who in Science and Engineering. He was also a member of the Alumni Association at the University of Missouri, Rolla MO. Survivors include Two sons, David (Lori) Franke, Matthew (Martha) Franke; daughter, Sarah (Craig) Miget; Two brothers, Charles A. Franke, Alvin A. (Judy) Franke; Two brothers-in-Law, Clinton Luehrs, Paul (Gerry) Koenig; Ten grandchildren, Rebecca Franke, Joel Franke, Aaron Franke, Micah Franke, Joshua Franke, Jacob Franke, Rachel Franke, Leah Miget, Alex Miget, Drew Miget; Four great-grandchildren, Hugh, Walter, Patrick and Trevor Franke. He was preceded in death by his parents; Two sisters-in-law, Darlene Franke and Esther Luehrs. Visitation will be from 4:00 pm to 8:00 pm on Friday, February 18, 2022 at Ford and Young Funeral Home in Perryville and from 8:30 am to 10:00 am Saturday, February 19, 2022 at Grace Lutheran Church in Uniontown, MO. Funeral Service will be at 10:00 am Saturday, February 19, 2022 at Grace Lutheran Church in Uniontown with Rev. Paul Winningham officiating. Burial will be at Grace Lutheran Cemetery in Uniontown, MO. Memorial contributions may be given to Hope Seed - 4501 Manatee Ave W #161 Bradenton, FL 34209. Online condolences may be made at www.fordandyoungfuneralhome.com. Ford & Young Funeral Home is in charge of arrangements.

The family of George Franke created this Life Tributes page to make it easy to share your memories.

Send flowers to the Franke family.