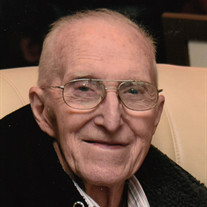 Francis Aloysius Blessing, 91, of St. Louis, MO, formerly of Perryville, MO died peacefully on October 25, 2019 at DeGreeff Hospice House in St. Louis, MO. He was born January 29, 1928 in Perry County, MO to Fred and Ida (Tucker) Blessing. He and Rose Lorene Cissell were married on May 22, 1954. She survives in Imperial, MO. Francis was a four-year US Air Force Veteran of the Korean War era and served in Japan, Korea and at Scott Air Force base. Three battle stars and the good conduct medal are part of his military record. Most of his working years were in the aviation industry. Beldex Corporation, Air Force Reserve Technician, and Department of Defense (DOD), Army Aviation Systems Command (AVSCOM) equipment specialist from which he retired in Nov. 1990. He was also a technician in configuration Management and the DOD Standardization Program, and he supervised the standardization program at AVSCOM for many years. In his younger years he did farm labor and worked at the shoe factory. Francis was a 67 year member of the Knights of Columbus #1263 and also a member of American Legion Post 133. He was a member of St. Joseph Catholic Church in Imperial, MO. Francis was a kind and considerate man who brought joy and laughter to his family. He enjoyed history, science, farming, car mechanics and all things in nature. Survivors include one daughter, Helen (Richard) Proehl of Eureka, MO, one son, Keith (Shelly) Blessing of Imperial, MO, four grandchildren, Matt (Jessica) Blessing, Ginny (Steve) Ahillen, Kara (Jacob) Haas and Erica (Nick) Morris, eight great-grandchild, Evelyn, Elenor, Celia, Zach, Phoebe, Max, Chloe and Remy. He was preceded in death by his parents, five sisters: Esther Hornbuckle, Pearl Dietrich, Virginia Weber, Lillian Kelley and Gertrude Miederhoff, three brothers: Harold Blessing, Edgar Blessing and Clyde Blessing. Visitation will be from 4:00 - 8:00 PM on Friday, November 1, 2019 at Ford & Young Funeral Home and on Saturday from 6:30 - 9:15 AM with a rosary at 8:15 AM. Funeral Mass will be held on Saturday at St. Rose of Lima Catholic Church in Silver Lake at 10:00 AM with Rev. Rich Wehrmeyer CM officiating. Burial will be in St. Rose of Lima Catholic Cemetery in Silver Lake, MO with military graveside provided by American Legion Post 133 & US Air Force. Memorial contributions may be given to St. Joseph Catholic Church in Imperial, MO. Online condolences may be made at www.fordandyoungfuneralhome.com. Ford & Young Funeral Home is in charge of arrangements.

The family of Francis Aloysius Blessing created this Life Tributes page to make it easy to share your memories.

Send flowers to the Blessing family.