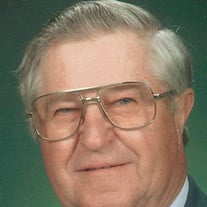 Elmer "Sonny" Boehme, 85, of Jackson, Missouri died Sunday, December 20, 2020 at St. Francis Medical Center. He was born January 12, 1935 in Wittenberg, MO to Theodore and Laura (Roth) Boehme. He first married Viola M. Richter on May 2, 1959. She preceded him in death on October 13, 1994. He then married Carol Palisch on September 6, 1997. She survives in Jackson. Sonny was a Farmer of Agriculture and livestock and was a ready mix concrete truck driver. He was a member of Trinity Lutheran Church in Altenburg and had a passion for bowling and playing cards. Survivors include three sons and two daughters, Stephen (Elaina) Boehme of Wittenberg, Faye (Ron) Ponder of Altenburg, MO, Dale (Theresa) Boehme of Altenburg, MO, Wayne (Beverly) Boehme of Cape Girardeau, MO; Kathleen Boehme of Cape Girardeau, MO, eight grandchildren, Kristin Pleimling, Cody Boehme, Melissa Schremp, Courtney Hogard, Adam Boehme, Gavin Boehme, Katy Boehme and Kyle Boehme and two great grandchildren, Camryn Boehme and Abbey Pleimling and one on the way. Three step children and spouses Craig Bodenschatz, Landon Bodenschatz and Terri Royer, also numerous step grandchildren and great grandchildren. He was preceded in death by his parents and first wife. He was youngest of twelve. Visitation will be from 8:30 am to 10:00 am on Saturday, December 26, 2020 at Trinity Lutheran Church in Altenburg. Funeral Service will be at 10:00 am Saturday, December 26, 2020 at Trinity Lutheran Church in Altenburg with Rev. Steven Dressler officiating. Burial will be at Trinity Lutheran Church Cemetery in Altenburg. Memorial contributions may be given to Trinity Lutheran Church in Altenburg and American Cancer Society. Online condolences may be made at www.fordandyoungfuneralhome.com. Ford and Young Funeral Home is in charge of arrangements.

The family of Elmer Boehme created this Life Tributes page to make it easy to share your memories.

Send flowers to the Boehme family.