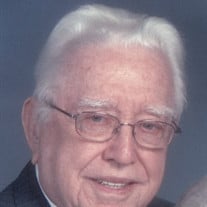 Edward C. Young Jr., 95, of Perryville, MO died Wednesday, August 14, 2019 at Independence Care Center of Perry County in Perryville, MO. He was born April 10, 1924 in Perryville, MO to Edward C. and Adelheit (Palisch) Young Sr. He and Marquerite N. "Pete" Miget were married August 25, 1945. She preceded him in death on November 16, 2007. Ed was past President, Owner/Operator and Funeral Director of Young & Sons Funeral Home. He had been employed as a lineman for Citizens Electric. He was a member of Immanuel Lutheran Church, American Legion Post 133, VFW Post 4282, and Knights of Columbus Council 1263 Booster member. He was a US Army Air Corp veteran of WWII and US Air Force veteran of Korean War. Ed was involved with the Boy Scouts for over 40 years. He was holder of the Silver Beaver Award, St. George Award and Cross of St. Benedict. He was a funny, loving man and will be missed by many. Survivors include his four sons, Edward C. (Gerald Landers) Young III of Chicago, IL, Thomas (Suzie) Young of Mehlville, MO, Robert J. (Lois) Young and John M. (Pam) Young all of Perryville; 10 grandchildren and 15 great-grandchildren. He was preceded in death by his parents; wife; and three brothers, Wallace W., Earl "Zuke", and James K. Young. Friends may call at Ford & Young Chapel on Monday, August 19 from 4:00 to 8:00 pm and on Tuesday, August 20 from 6:30 to 9:00 am. He will then be taken to Immanuel Lutheran Church in Perryville for funeral service at 10:30 am with the Rev. Matthew Marks officiating. Burial in Mt. Hope Cemetery with military graveside honors provided by VFW Post 4282 and Air Force Honors Team. Memorial contributions may be given to Immanuel Lutheran Church or Cemetery. Online condolences may be made at www.fordandyoungfuneralhome.com. Ford & Young Funeral Home is in charge of arrangements.

The family of Edward C. Young Jr. created this Life Tributes page to make it easy to share your memories.