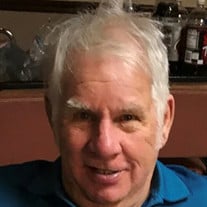 Edward Jesse (Jack) Deckerd was born at home during a snow storm on the 22nd of January 1942 to, Edward Phillip and Bessie Juanita (Brand) Deckerd. He passed away at Country Meadow Nursing Home in Park Hills, MO on November 28, 2020 at the age of 78. He and Betty Gladem were married on August 3, 1968. She survives in Perryville, MO. Ed graduated from O'Fallon Technical High School in St. Louis, Missouri in January 1960. He joined the United States Air Force on the 1st of March 1960. After Basic Training he was assigned to the 1611th Air Police Squadron at McGuire Air Force Base, New Jersey. The Cuban Missile Crisis occurred while he was on active duty. In March of 1964, Ed became a proud member of Plumbers Local 35 in St. Louis until their merger with Plumbers' and Pipe Fitters Local 562. Ed was an Ordained Minister with Full Gospel Churches International Fellowship. In his younger days he enjoyed farming, vegetable gardening, hunting and walking through the woods. He was a professional wrestler and a stock car driver. His spiritual life and his family were the most important things in his life. He brought joy to many people by playing his guitar, bass guitar, and banjo until he got arthritis in his fingers. He and his wife enjoyed singing many southern gospel songs in church. Other survivors include his daughter Belinda L. Deckerd; three sons, Stephan E. (Candice) Deckerd, Bleau B. (Rachel) Deckerd, and Darin K.P. (Mandy) Deckerd; and three sisters, Juanita Fay Hedding, Opal Hovis, Mary Ann Lashley. He and Betty enjoyed 14 grandchildren and 8 great grandchildren. He was preceded in death by his parents; one daughter, Patricia Sue McGinnis and two brothers-in-law, Pete (Warren) Hedding and Larry (Butch) Lashley. Friends may call at Ford and Young Funeral Home on Thursday, December 3 from 4 to 8:00 pm and on Friday , December 4 from 6:30 am until time of service at 10:00 am with Rev. Robert Harris officiating. Burial in Yount Community Cemetery in Yount, MO with military graveside provided by US Air Force and American Legion Post 133.. Memorial contributions may be given to St. Judes Childrens Hospital Online condolences may be made at www.fordandyoungfuneralhome.com. Ford and Young Funeral Home is in charge of arrangements.

Edward Jesse (Jack) Deckerd was born at home during a snow storm on the 22nd of January 1942 to, Edward Phillip and Bessie Juanita (Brand) Deckerd. He passed away at Country Meadow Nursing Home in Park Hills, MO on November 28, 2020 at the... View Obituary & Service Information

The family of Edward J. Deckerd created this Life Tributes page to make it easy to share your memories.

Edward Jesse (Jack) Deckerd was born at home during a snow storm...

Send flowers to the Deckerd family.