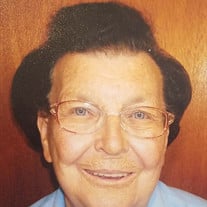 Edna M. Pilger, 89, of Eureka, MO, formerly of Perryville, MO, died Sunday, January 31, 2021 at her residence. She was born September 20, 1931 in Perry County, MO to Wesley W. and Merle M. (Zahner) Black. She first married Charles L. Smith on May 24, 1952. He preceded her in death on June 24, 1978. She then married Floyd Pilger on July 5, 1980. He preceded her in death February 25, 1993. Edna was a devoted wife, loving mother, and an exceptional homemaker. She enjoyed gardening, canning vegetables, and cooking for her family. She was happiest when she was spending time with her children, grandchildren, and great grandchildren. She was an active member of Northside Baptist Church in Florissant, Missouri where she served in the nursery and taught Sunday School for preschoolers. After moving to Perryville, Missouri she continued her love of serving the church through teaching Sunday School at Bethlehem Baptist in Crosstown, MO. Survivors include one son and two daughters, Peggy (Charles) Lindner of Florissant, MO, Johnny L. Smith of DeSoto, MO; Patricia S. Mertens of Eureka, MO; foster son, Daniel L. (Kathy) Fitzgerald of St. Louis, MO, step-son, Gary (Jane) Pilger of Mexico, MO; step-daughter, Starlet Ritter of Auxvasse, MO; one brother, Ronald (Betty) Black of Perryville, MO; seven grandchildren, Angela Lindner, David Lindner, Jarrett (Samantha) Smith, Jordan Smith, Belinda (Shane) Doolin, Jesse (Andrea) Mertens and Jenna (Derick) Laubert, five great grandchildren, Damian Cannady-Lindner, Dominic Cannady-Lindner, Addison Smith, Jed Doolin and Maxwell Laubert, two foster grandchildren, Joshua and Aaron Fitzgerald and four step grandchildren. She was preceded in death by her parents, both husbands and one brother Gerald Black. She was a kind, caring, and generous person, a dear aunt, great aunt, cousin and friend to all. She will be greatly missed. Visitation will be from 2:00 pm - 7:00 pm on Friday, February 5, 2021 and on Saturday from 6:30 am - 8:00 am at Ford and Young Funeral Home in Perryville. Funeral Service will be at 10:00 am Saturday, February 6, 2021 at Bethlehem Baptist Church in Crosstown with Rev. Steve Francis officiating. Burial will be at York Chapel Cemetery in Longtown. Memorial contributions may be given to St. Louis Children's Hospital. Online condolences may be made at www.fordandyoungfuneralhome.com. Ford and Young Funeral Home is in charge of arrangements.

The family of Edna M. Pilger created this Life Tributes page to make it easy to share your memories.

Send flowers to the Pilger family.