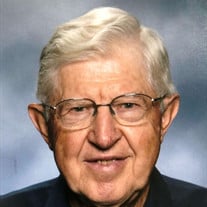 Edgar N. Roth, 93, of Perryville, passed away on January 7, 2022. Edgar was born on October 13, 1928, to Leo and Linna (Mueller) Roth at Wittenberg, MO. He was baptized on October 20, 1928 by Rev. R.J. Deye and confirmed on March 29, 1942. He married Betty Verseman on July 26, 1952, in Farrar, MO. They were married for 68 years. Betty preceded him in death in May of 2020. Edgar is survived by his children Lynette (Robert) Biesendorfer of Marthasville, MO, Jane Roth of St. Louis, Royal Roth of Mobile, AL, and Randall Roth of St. Louis; two grandchildren, Julee and Tim Biesendorfer; and one great-grandchild, Ethan Biesendorfer of Seattle, WA. Edgar attended St. Paul's Lutheran School in Wittenberg, MO where he loved to play baseball. He later attended and graduated from Concordia High School in River Forest, IL. He then received his Bachelor of Science degree in 1952 from Concordia Teachers College in River Forest. During college he ran track, specializing in the hurdles and high jump. Edgar earned his Master of Arts Degree from Concordia in 1963. For forty years Edgar served as principal, teacher, music director, and coach in Lutheran Schools. He also played organ for many church services during this time. He served three churches during his teaching career: St. Peter's Lutheran in Holyrood, KS, St. Paul's Lutheran in Woodworth, IL, and St. Mark's Lutheran in Steeleville, IL. After retiring to Perryville, MO, in 1992,Edgar and Betty enjoyed traveling all over the United States. Edgar substitute taught in area schools for many years as well as served as a substitute organist in various Lutheran churches. But his main hobby was his garden. Edgar was an avid gardener and known for his beautiful flowers. He also loved to play pinochle. Edgar is preceded in death by his wife, Betty, his daughter, Roxane, his parents, and his four brothers, Gilbert, Arnold, Willard, and Vernon Roth. Visitation will be at Immanuel Lutheran Church on Wednesday, January 12, from 9:00 - 11:00 with the funeral service at 11:00, with Rev. Matthew Marks officiating. Burial will be at the church cemetery. Memorial contributions can be given to Immanuel Lutheran School in Perryville, MO, St. Mark's Lutheran School in Steeleville, IL, or to St. Paul's Lutheran School in Woodworth, IL. Online condolences may be made at www.fordandyoungfuneralhome.com. Ford and Young Funeral Home is in charge of arrangements.

The family of Edgar N. Roth created this Life Tributes page to make it easy to share your memories.

Send flowers to the Roth family.