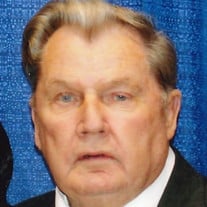 Doyle Luckey Lane, 86, of Brazeau, died Sunday, July 25, 2021, at Independence Care Center of Perry County in Perryville, Missouri. He was born August 15, 1934, in Brazeau, Missouri to William E. Lane, Sr., and Orma Luckey Lane. He married his childhood sweetheart, Jo Ann Barber, on October 30, 1954, in their hometown church, Brazeau Presbyterian Church. With a deep love of farming, he and his brother, Bill, farmed the Lane family land together for many years. He was a school bus driver for Meyer Bus Lines, Inc. for 11 years. He proudly served his country in the National Guard as an Assistant Gunner, Sergeant E5 from February 1953 to February 1962. In April 1968 he was employed by the Missouri State Highway Department and enjoyed working side-by-side with his highway buddies until his retirement in 1998. After retirement, he enjoyed driving a grain truck and buying soda for his buddies at Buchheits. He worked hard his entire life doing the job he cherished most - being a good husband, dad, father-in-law, and grandpa. He loved going to his kids' and grandkids' events. He and Jo Ann traveled many miles to ensure they never missed the special events of "Grandpa's Girls" or "those grandsons of mine". He was called "Grandpa" by many non-family kids too, as he often had a pat -on-the-head or a dollar folded in his hand to secretly give to little ones. He loved a party - and the more the merrier. His smile was large, his blue eyes twinkled, and his laughter filled the country air as he often celebrated by dancing his little jig at the home he loved - the house at the corner of Hwy. C and D in Brazeau. He was affectionately called by many, and proud to be, the Mayor of Brazeau. After retirement he was often found "driving around Jo Ann's lady friends" to picking up supplies for the Brazeau Historical Society or church events - but only after he shared breakfast with his buddies at West End Tavern. He was a life-time member of Brazeau Presbyterian Church. He especially loved Christmas Eve and his family's tradition of joining together to fill the church pews to share Jesus's birth. The Church's Donut Sunday was also an event he seldom missed! Survivors include three daughters, Wanda Faye Thurman of Maryland Heights, Missouri, Gale Ann Lane (Joseph) Bell of Columbia, Illinois, Nicki Jo (Ruben) Brown of Shiloh, Illinois; two sons, Allen Edward (Diane) Lane of Cape Girardeau, Missouri and Keith Doyle (Sandra) Lane of Fenton, Missouri; eleven grandchildren and eleven great-grandchildren. Friends may call at Ford and Young Funeral Home on Friday, July 30, from 4:00 to 8:00 pm and on Saturday, July 31 from 6:30 to 8:30 am. Funeral service will be held at Brazeau Presbyterian Church in Brazeau on Saturday, July 31 at 10:00 am with the Rev. Christopher Seah officiating. He will rest eternally beside his wife in Brazeau Cemetery. Memorial contributions may be given to Brazeau Presbyterian Church. Online condolences may be made at www.fordandyoungfuneralhome.com. Ford and Young Funeral Home is in charge of arrangements.

The family of Doyle Luckey Lane created this Life Tributes page to make it easy to share your memories.

Send flowers to the Lane family.