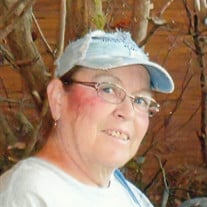 Debra Kay Podorski, 62, of Perryville, died Monday, December 9, 2019 at Perry County Memorial Hospital. She was born November 19, 1957 in St. Louis, MO to the late Robert Richardet and survived by Janice (nee Hendrix)(Carol "Gene") Worley of Pacific, MO. She and Daniel W. Podorski were married May 17, 1990. He survives in Perryville. Debra was retired and she loved spending time with her grandchildren and living in the country. Survivors include her step son, Nathan (Kim) Podorski of Wentzville, MO, two step daughters, Jennifer (Mike) Swafford of O'Fallon, MO and Melissa (Dylan) Ebert of St. Peters, MO, one brother, Alan (Melissa) Richardet of St. Louis, MO, six grandchildren, Morgan Podorski, Jonathan and Brandon Swafford, Peyton Blair and Logan and Cole Ebert. She was preceded in death by her father, Robert Richardet and one brother, James R. Richardet. Visitation will be from 4:00 PM to 8:00 PM on Thursday, December 12, 2019 and 6:30 AM until time of Service at 10:00 AM on Friday, December 13 at Ford & Young Funeral Home in Perryville. Service will be at 10:00 AM Friday, December 13, 2019 at Ford & Young Funeral Home in Perryville with Pastor Ray White officiating. Burial will be at Whitewater Christian Cemetery in Perry County. Memorial contributions may be given to St. Jude Children's Research Hospital. Online condolences may be made at www.fordandyoungfuneralhome.com. Ford & Young Funeral Home is in charge of arrangements.

The family of Debra Kay Podorski created this Life Tributes page to make it easy to share your memories.

Send flowers to the Podorski family.