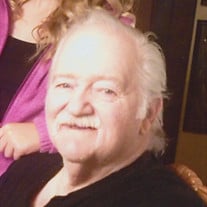 David Lauren Richardet Sr, 69, of Perryville, died Wednesday, March 25, 2020 at his residence. He was born August 4, 1950 in Perryville, MO to Charles F. Rchardet and Mary Lou (Herod) Richardet Enlow. David was of the Catholic Faith and... View Obituary & Service Information

The family of David Lauren Richardet created this Life Tributes page to make it easy to share your memories.

Send flowers to the Richardet family.