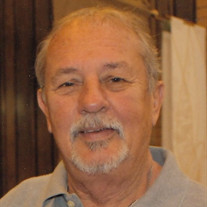 David W. Chappius, 75, of Perryville, died Monday, December 30, 2019 at his residence in Perryville, MO. He was born September 17, 1944 in Perry County, Missouri to John Vincent and Elsie Marie (Ernst) Chappius. He was married to Julie (Hart) Cramer on November 9, 1968. He was retired from the US Postal service. He was baptized in the Catholic faith. He was a member of American Legion Post 133, AmVets Post 94, Riverhills Eagles Lodge 4034, Elks Lodge 2701 and VFW Post 4282 Booster. He was a US Army veteran of Vietnam War. Survivors include his one son, John (Dewanna) Chappius of Perryville; one daughter, Melissa (Benjamin) Hemmann of Perryville; two sisters, Shirley Yeager of Perryville and Roxie (Ed) Drayton of St. Louis; one brother, Jim (Mary) Chappius of Perryville; one brother-in-law, Paul Otte of Ste. Genevieve; five grandchildren, Shelby, Connor and Brooke Chappius, Hanna Kakouris and Gavin Hemmann; his longtime soulmate and companion, Therese Gremaud and her children, Melissa Hayden and Michael (Cora) Gremaud and their children, Evan, Colby and Logan Hayden and Preston, Harrison, and Ellianna Gremaud. He was preceded in death by parents; two sisters and a brother-in-law, Ruby Otte, Ruth and Ray Rauh; and one brother and sister-in-law Donnie and Becky Chappius. Visitation will be held at Ford & Young Chapel on Monday, January 6 from 4:00 to 8:00 pm and on Tuesday, January 7 from 6:30 to 9:30 am. He will then be taken to St. Vincent de Paul Catholic Church for Mass at 10:00 am with Rev. Tom Croak C.M. officiating. Burial in Mt. Hope Cemetery with military honors provided by American Legion Post 133 and Delta Team. Memorial contributions may be given to Humane Society. Online condolences may be made at www.fordandyoungfuneralhome.com. Ford & Young Funeral Home is in charge of arrangements.

David W. Chappius, 75, of Perryville, died Monday, December 30, 2019 at his residence in Perryville, MO. He was born September 17, 1944 in Perry County, Missouri to John Vincent and Elsie Marie (Ernst) Chappius. He was married to Julie... View Obituary & Service Information

The family of David W. Chappius created this Life Tributes page to make it easy to share your memories.

Send flowers to the Chappius family.