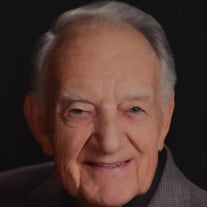 Clinton Harold Schade, 93, of Perryville died Monday, Nov. 23, 2020 at Perry County Memorial Hospital. He was born Dec. 7, 1926, in Wittenberg, Missouri to Rudolph and Frieda (Thurm) Schade. He and Carolyn Mae Huning were married August 16, 1958 in St. Louis, Missouri. Clint graduated from Perryville High School in 1945 and served in the US Army during World War II, stationed in Germany. He lived a long and full life. He spent 62 amazing years married to the woman that captured his heart in a grocery store in St. Louis decades ago. He had four children, seven grandchildren and six great-grandchildren who he couldn’t have been prouder of and always loved to brag about. ‘Good’ is a simple word, but it still feels like the best way to describe him. He was just such a good man. He had a gentle soul and was always smiling. He loved to walk up to people he had never met and start a conversation - no one was a stranger. Clint worked in the grocery store business for much of his life, managing the A&P and later the Bi-Rite grocery stores in Perryville. After retiring for only a brief time he realized it wasn’t for him and he went to work part-time at Immanual Lutheran Grade School in Perryville. He touched so many lives and always enjoyed talking with and being around the children. And boy did he love his bowling! He never bowled that elusive 300 game, but made it through 9 perfect frames and ended up with a 287. Even at 93 he rolled more than one 200+ game. Just a few weeks before his passing he bowled a 177. He went out with a bang and we know he’s smiling about that and we are sure sharing that info with others in heaven. He was a member of Immanuel Lutheran Church in Perryville. Clint is survived by his wife Carolyn of Perryville, two sons, Kevin (Lois) Schade of Cape Girardeau and David (Dawn) Schade of Murray, KY and two daughters, Terri (Paul) Schnettgoecke of St. Louis and Cynthia Schade of Perryville; seven grandchildren, Kyle (Jenny) Schade, Lauren (Ethan) Essner, Kenneth (Christina) Wyatt, Peggy (Cheston Wainscott) Wyatt, Ryan (Sarah) Conrad, Adam Schnettgoecke and Laura Schnettgoecke; six great-grandchildren, Noah, Carson, Annie, Sean, Conlee and Asher; one sister Marion (Ollie) Grebing of Jackson and two sisters-in-law, Ruth Balzer of Bay Minnette, AL and Vi Huning of St. Louis. He was preceded in death by his parents, a brother Harry Schade, a sister Virginia Schade and two brothers-in-law, Bob Balzer and Ed Huning. Visitation will be 9:00 am to 11:00 am on Monday, December 7, 2020 at Immanuel Lutheran Church in Perryville. Masks will be mandatory by the request of the family. Funeral Service will be at 11:00 am Monday, December 7, 2020 at Immanuel Lutheran Church in Perryville with the Rev. Joseph Schlie officiating. Private burial for family only will be at Immanuel Lutheran Cemetery in Perryville. In lieu of flowers memorial contributions may be given to Immanuel Lutheran Church. Online condolences may be made at www.fordandyoungfuneralhome.com. Ford & Young Funeral Home is in charge of arrangements.

The family of Clinton Harold Schade created this Life Tributes page to make it easy to share your memories.

Send flowers to the Schade family.