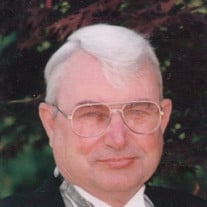 Charles Louis Turlin, 72, of Perryville, died Tuesday, January 7, 2020 at St. Francis Medical Center in Cape Girardeau, MO. He was born July 6, 1947 in Ironton, MO. to Lannie Louis and Irene (Seabaugh) Turlin. He and Sandra (Wahlers) Turlin were married November 21, 1970 at Immanuel Lutheran Church. She survives in Perryville. Charles was a Civil Engineer for the Government. He was of the Catholic faith. He was a 1965 PHS graduate and a 1969 graduate of the University of Missouri, Rolla. He retired from the Corp of Engineers, St. Louis District after 34 years of service. During his years of service he was a part of the Flood of 93 in Perry County, Hurricane Andrew in Florida, and Hurricane Katrina in Louisiana. He was dedicated to his work. Charles was an avid hunter. He spent many hours at their property that consisted of 100 acres and a cabin. He loved to hunt deer, turkey and squirrel. This was a passion that was passed to him from his father which he passed on to his children and grandchildren. Many hours were spent with friends and family laughing and sharing "tall tales". He was a member of the Sportsman's Club, Little Saline, VFW Auxiliary, Knights of Columbus, Charter Member of the Perryville Elks Lodge. Charles was on the committee that recommended purchasing the land and building the current Elks Lodge, where he served as an Exalted Ruler, Loyal Knight, Trustee and Secretary. Charles was a wonderful son, husband, father, grandfather and friend. He will be dearly missed. Survivors include one son, Torry Turlin of Perryville and one daughter, Dana (Kerry) Hogard of St. Mary, and three grandchildren, Tyler, Brooke and Ryker. He was preceded in death by his parents and one sister: Joan Hallquist. Friends may call 4:00 PM to 8:00 PM on Monday, January 13, 2020 and from 6:30 AM - 10:00 AM on Tuesday at Ford & Young Funeral Home in Perryville. Perryville Elks Wake 7:00 pm Monday. Funeral Service will be at 10:00 AM Tuesday, January 14, 2020 at Ford & Young Funeral Home in Perryville with Deacon John Darin officiating. Memorial contributions may be given to American Cancer Society. Online condolences may be made at www.fordandyoungfuneralhome.com. Ford & Young Funeral Home is in charge of arrangements.

The family of Charles Louis Turlin created this Life Tributes page to make it easy to share your memories.

Send flowers to the Turlin family.