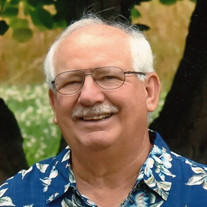 Charles E. Bohnert, 66, of Altenburg, died Thursday, December 19, 2019 at Southeast Hospital in Cape Girardeau, MO. He was born February 23, 1953 in Cape Girardeau, MO to Edward and Lorna (Meinz) Bohnert. He and Martha (Littge) Bohnert were married April 20, 1974. She survives in Altenburg. Charles was a warehouse technician at Proctor & Gamble. He was a member of Trinity Lutheran Church in Altenburg, Amen Bible Class, LLL Representative, former usher, past board member of Perry County Senior Center, delivered Meals on Wheels and served on the Perry County Mill Tax Board. Survivors include his three daughters, Nicole (David) Warner of Fenton, Angela (Jason) Kiefer of Perryville, and Adele (Cory) Esselman of Jackson, one brother, Dale (Joan) Bohnert of Frohna, six grandchildren, Grace Geringer, Blake Westbrook, Vivienne and Silas Kiefer and Grady and Ward Esselman one brother-in-law, Bob Jalack of St. Louis, MO. He was preceded in death by his parents and one sister: Susan Jalack; Friends may call 4:00 PM to 8:00 PM on Sunday, December 22, 2019 and on Monday from 6:30 - 8:30 AM at Ford & Young East Perry Chapel in Altenburg. Service will be at 10:00 AM Monday, December 23, 2019 at Trinity Lutheran Church in Altenburg with Rev. Steven Dressler officiating. Burial will be at Trinity Lutheran Cemetery in Altenburg. Memorial contributions may be given to LLL, United in Christ Lutheran School or Crown Hospice. Online condolences may be made at www.fordandyoungfuneralhome.com. Ford & Young Funeral Home is in charge of arrangements.

The family of Charles E. Bohnert created this Life Tributes page to make it easy to share your memories.

Send flowers to the Bohnert family.