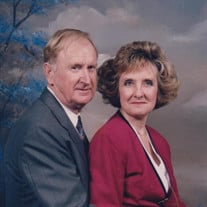 Bob Bradley, 89, of Perryville, died Tuesday, May 19, 2020 at Missouri Veterans Home in Cape Girardeau, MO. Kathleen N. Bradley, 73, of Perryville, died Friday, May 15, 2020 at her residence in Perryville, MO. He was born August 8, 1930 in Yancopin, Arkansas to Bob and Frances (Rambo) Bradley. She was born October 6, 1946 in St. Francois County, MO. to Marvin Lee and Louise Elizabeth (Sturm) Hafley Beeson. Bob and Kathleen were married December 22, 1973. She preceded him in death on May 15, 2020. He was a member of Kingdom Hall of Jehovah's Witness in Perryville, MO. He was a retired riverboat pilot and a veteran of the Korean Conflict. Kathleen was a sub contractor for Industrial Cleaning. She was a member of Kingdom Hall of Jehovah's Witness in Perryville. She also taught bible study for over 30 years Survivors include their four daughters, Deborah Elaine (Richard) Batchelor of Perryville, Victoria Gale (Robert A.) Yount of Sedgewickville, Angela Louise (Bryan) Dace of St. Louis, Cynthia Diane (Lovell) Wright of Sheboygan, WI; Kathleen’s sister, Beverly Louise Major of Farmington, Kathleen’s brother, Paul Hafley of Bonne Terre nine grandchildren and seven great-grandchildren. He was preceded in death by his parents, wife, and one sister, Betty Cambron. She was preceded in death by her parents and two brothers, Marvin and Richard Hafley. Family will have a Zoom memorial service Saturday, December 12th at 2:00 pm. (Meeting ID #4027398314 Passcode BMemorial) Memorial contributions may be given to Kingdom Hall of Jehovah's Witness. Online condolences may be made at www.fordandyoungfuneralhome.com. Ford & Young Funeral Home is in charge of arrangements.

Send flowers to the Bradley family.