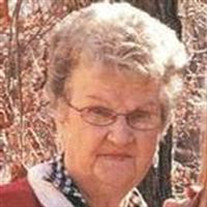 Betty Jean Renaud, 82, of Perryville died on her birthday at Perry County Memorial Hospital in Perryville, MO. She was born on December 27, 1930 in Perryville, MO, daughter of Thomas and Idelle (Moore) Cissell. She and Ottmer Lawrence Renaud... View Obituary & Service Information

The family of Betty Jean Renaud created this Life Tributes page to make it easy to share your memories.

Betty Jean Renaud, 82, of Perryville died on her birthday at...

Send flowers to the Renaud family.