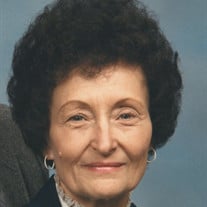 AUDREY SANDLIN PERRYVILLE Audrey Sandlin, 98, of Perryville, Missouri died November 13, 2021 at Integrity of Columbia in Columbia, Illinois. She was born February 18, 1923 in Yount, Missouri to Elmer and Etta (Statler) Walker. She and... View Obituary & Service Information

The family of Audrey Frieda Sandlin created this Life Tributes page to make it easy to share your memories.

Send flowers to the Sandlin family.